damn this went from floof to insecurity/low self esteem galore

yuri n wine
I'm Not Cut Out to Be a Princess, so I'll Elope with the Villainess. discussion 16 May 03:35
Quote

I knew they weren’t gonna kiss, they’re both cowards 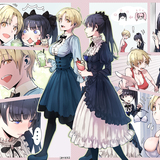 lowkey thought this was rin and saber

yuri n wine
I Wish Her Love Could Come True discussion 04 May 22:19
Quote

I Ike the art style, plus they’re both cute

I knew it, this bitch is fucking her piano

seems like the upcoming character is not liked, boy this manga seems to want to make it hard to keep with it after how good the early chapters were.

She is the (pseudo) love rival turned into ally. She is also the catalyst that pushes Claire and Rei to become a couple. I personally like that she kicks rei’s ass, both mentally and physically 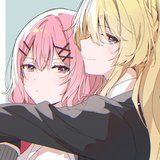 I vote for polyamory route which doesn’t include renako nor kaho. mai x satsuki x ajisai

gay usagi is canon, homegirl literally has a yuri harem

I’m digging it. The only thing missing from the contract is lewd hand holding

Never said that, but your dumb it's okay.

can you take your disgusting self deprecation somewhere else damn it

the het love interest and the butch look the same lol. Also that’s a weird ass way to harass someone in their sleep

Also iirc most of Sato's violent scenes are taken care of offscreen except Shoko which is supposed to be the first true mistake she made.

And that mistake can be interpreted as a “fight or flight” response from satou, who was terrified of losing her peaceful life with shio

Any violence satou commits in the series is a response to shio being in danger. 1) the painter whose apartment they lived in tried choking shio 2) the creepy stalker teacher who was jealous of and intended to harm satou’s “boyfriend.” 3) the random dude’s whose eyes satou gouged out were about to assault shio 4) shouko betrayed their friendship by taking that picture

I like the madonna one. maria san cares a lot about kotone and rui, very heartwarming

why the fuck would you let your bae leave while crying? hold her hand and snuggle her dammit useless bean chan

darn this society even lolis are lolicons these days 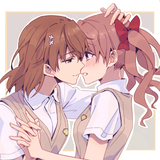 if y’all want yuri from railgun, read astral buddy. It’s hella gay. while it doesn’t focus much on misaka x kuroko, it’s explicitly confirmed that junko (drill hair chan) has romantic feelings for misaki (remote cutie). We learn that tokiwadai (the all girls school most of the female characters attend) has a tradition in which girls confess to their (female) crush under a certain tree within the school grounds. astral buddy is also further confirmation that misaki has a yuri harem and she tries adding kuroko to it as well

on the cheek? you coward

Thanks a lot! I wasn't aware they were two different version of the novel. I'll check that out.

Some more info. There’s a total of 5 light novel volumes, 4 volumes have been officially translated into English. However, the web novel is complete and the fan translation is accessible for free (with inori’s permission). I’ve read both versions and they’re not particularly different, the web novel just feels more episodic. Plus the web version has some extra sex chapters while the light novel omits it