Loved to read this draft, can't wait to read the real deal ... soon enough, with 53 chapters long or so ...

It's funny, there's thousand of stories like these out there, but if goes full yuri like this it gets axed because obviously doesn't sell, oh well, at least it went out with a (gang) bang 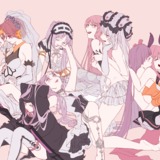 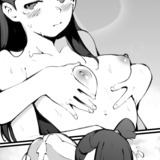 Actually canon, fond memories of this panel on Omake 69 of LWA.

This is going pretty well, it's going to be separate cases (pretty much how Kurogane Ken's Tae and Jimiko supposed to be),but now that this new character came into play, I'm not so sold on the idea that Yamanobe and Komori are going to be an item, not mindblowing by any fashion but is keeping me on my toes.

Also it might be me or is the art really bad in this chapter?

I heard he's getting acquainted with digital art, as an amateur artist myself can attest that digital drawing is thousand times different than pen drawing. So cut him some slack.

I no longer follow this story, I just check the comment section to bask on everyone's tears/frustrations with this story.
And I'm here to remind you all that Dear my Teacher was sidelined for ... this ...

Weak premise, uninteresting characters, overused plot (girls can't love girls, where have I seen this before?), a shame, really, because the art is pretty good.

Could be wrong, but this prince is a princess don't know much about boys, but not all of them wear flower clips like that, and those quasi-boobs down that side panel are not fooling me at all, also, Tomoharu might be a male name, but Seki, as far as I know, it's female too, we'll see.

This is taking a turn for the better, I dig this little new pairing. Though we still demand more focus on Kana-chan and MOMOSE-SAMA!

It is really a shame how stale, lackluster and boring this story has gotten since the inception of their college days, these side characters are so weak they add little to nothing to the story, the magic in Kase-san was they living their little romance with no one around to annoy them, that was has sold the story to me, not these useless dramas nor sidecharacters (which I don't mind, as long as helps main characters to build their personalities/growth, etc or are meaningful to the story)

This series had such a great start but it went downhil since this Legion came into the picture. The idea was Dark fights Light from the Dark's perspective, not the other way around as usually does, I particularly enjoyed a whole lot of the mental games she has pulled against Tres Magia, but they suddenly vanished, poof just like that, what was the purpose of them anyway, author-san?
Seriously, if you takeTres Magia out of equation, you fundamentally remove a key part of this story, and got this super rushed Legion arc out-of-freaking-nowhere.
I got my complaints but I bring solutions too, I'd go with a solo, badass magical girl solo, resembling and acting like an angel but actually hiding a true purpose, not to brag, but definitely a better route than this and being true this series initial concept.

I've been looking forward to their dynamic, and it's amazing? That time leap though, I get suspicious when resolutions come too soon like that... can't see going too long.

I've just finished NXIVM's Enslaved on StarZ, and I really needed this, it was AMAZING!

I remember this episode quite well, Episode 15 of Season 1, that was preceded by Episode 14: More than Friends and followed by Episode 16: μ's Greatest Coming Out Party, oh man, fun memories.

I don't trust this idol lookalike, Kiki, stay on your guard, Shanon-sama!

You see, this is how you live up to your title, some authors (tMnR) could learn from that. Pretty satisfied with the direction this is going so far, I absolutely hate Sei and Yoru, (the tomboy girl too, can't remember her name), empathize to an extent with Aya-chan, looks like Yoru's arc is done, let's see how author is gonna untangle the tomboy arc now.

Why even have this farce up until now then? They didn't even show Kaoru's face in the end, signifying her really being not important as a character. Ffs

Now that you've mentioned. and gathering up all the hints author has left for us, that is clearly not Kaoru, but either a Twin, a look-alike, or a doppelganger (strongly leaning towards that). There you have it, mystery solved and we can go back to our normal lives!

I have no problems with open endings, but do it in a way you can actually connect the dots in the end? This story has ended, however, the big mystery are not the unsolved conflicts nor the plot holes, but the status of Uta-Trashoru's relationship, some have interpreted they are together, I personally don't think they are, but give us a hint? Like Uta wearing a ring or a ring holder necklace, or at their doorstep, like a newly-wed thing of sorts, I dunno, any hint even if it is to confirm otherwise, but to end it like this you disrespect every reader who stayed for the ride these past 4 years

to be honest, and I might be the only one here, but instead moving to live with Trashoru again (like no growth whatsoever, right?!), I wanted Uta to moved on completely, and actually dated someone else (like Sayaka in Bloom Into You - we only learned later on she was dating someone else), that would mean something to me. Like I tried and did my best, but you know what? Sometimes in life you just gotta learn to move on, that would be more meaningful to me, this resolution right here, alongside the several plot holes/unsolved conflicts, ain't it!

This was actually PRETTY BAD, I was not rooting for Uta-Trashoru's route, but this resolution actually accomplishes nothing, we have started from nothing and reached no where, will echo some of Blastaar's sentiments, and wrap-up saying I'm scratching tMnR's works from my reading list forever, he/she struggles to develop plot as much as struggles to draw anatomy's, anyone with a more clinical eye should have caught that too.

TifalovesAerith
How to Make a Woman Fall in Love With You discussion 19 Oct 18:34
Quote

I could be wrong, call me crazy but I think, and again, I could be so wrong, Konbu Wakame-sensei takes a liking at voluptuous chests, just a silly hint, I might be off though.