Kal3d
A Manga With Too Many Premises discussion 19 Feb 02:30
Quote

Too many premises eh? Well, where is the love rival huh? Pretty dissapointed we didn't get that in there somehow. Needed at least two pages more.

Kal3d
A Yuri Story About a Girl Who Insists "It's Impossible for Two Girls to Get Together" Completely Falling Within 100 Days discussion 17 Feb 14:46
Quote

The term shoujo ai is still used quite often in the west to talk about yuri with no sexual content unfortunately, even though it makes no sense and it never has, a good example of that would be MyAnimeList which still uses both shoujo ai and yuri as categories for anime and manga, the yuri category for anime is absolutely hilarious btw since many of the anime in that category are not even yuri to begin with, they just have some lesbian sex scenes for fan-service yet somehow that counts as yuri.

Kal3d
A Yuri Story About a Girl Who Insists "It's Impossible for Two Girls to Get Together" Completely Falling Within 100 Days discussion 16 Feb 14:22
Quote

Okay, so i know theres a lot of problematic stuff with some of the situations we had on the second chapter (Mostly the forced skinship part), but its actually pretty funny how inept Fuwa is in trying to "convert" the MC. It almost feels like a parody of the pay for gay genre, but i honestly don't think this was nothing more than just a "haha lesbians, am i right?" gag the author put in. Though, i really hope theres not more "lesbian who doesn't know boundaries" vibes from Fuwa next chapter.

"And all of that ignores that the whole set up with the “bet” is designed to make Marika more resistant to “falling” since she doesn’t get paid if she does. Ugh."

That's confusing, because in this chapter Marika seems to have been paid up front? Does she have to give it back if she loses?

She was given the bag she wanted at the beginning of the chapter, so i guess it is implied the other girl paid some of the wager upfront.

You're thinking of this, realistically, which you shouldn't. Instead, consider the fact that you got a closeted homosexual tsundere who's trying to resist her own feelings and a lesbian who has a gaydar so finely tuned that she can read the other girl's mind and know exactly what she wants and feels.

I guess the MC loudly stating how its impossible for two girls to be together out of nowhere set that gaydar off? Also, please tell me that this gets better? I mean, the second chapter was pretty funny, but theres a lot of red flags in it that were hard to ignore.

This series have been really frustrating to read at times, but goddamn if i didn't grinned like a moron when that moment finally happened. I guess i just love cheesy dramatic kisses. BUT WAIT! The two basic bitches behind them definitely saw them didn't they?

Yeah, can we have Majoccoid and Mochi Au Lait work together again on another series ASAP? This was sooo good that i need more stories from them. 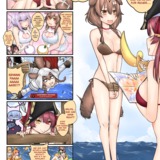 YuriWhale's chaotic style of yuri fits surprisingly well with Hololive. Now we need a YuriWhale recreation of that faithful night Marine and Shion spend together.

My guess is that Kurokawa would want some advice on how to turn down someone from Nanaki, but we would get the usual misunderstanding plot instead and Nanaki would go back to her old flock making Kurokawa sad and thus once again postponing any advancement between those 2. 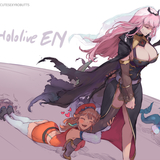 I feel some kind of way whenever i see fanart of Calli. That is some hot avatar to have. 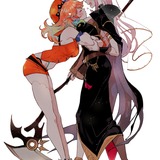 @Jelbel That was extremely cute though. It does feel like she was surprised Calli said that, almost like she wasn't sure Calli felt like that. That said, they're the best ship on HoloEN and my yuri goggles are too tight to see facts.

Was that really the end? It felt like a set up for an actual final chapter where Ookuma brings Kanda to her parents and vice versa and it ends with a shot of the couple, not on this cliffhanger. It was an extremely cute chapter though.

@Linterdiction Which stream is that? Haven't seen that one.

You know, if you ignore the very out of left field mystery murder plot, this story has been really good so far. There's drama, side characters relationships being developed and the main couple is also getting nice development. I really like the how everything is going so far. Let's hope the murder mystery doesn't ruin the vibes in future chapters.

I think the yuri tag should probably be removed unfortunately. After reading up until the end of volume 1 from the Spanish translation it seems like there will not be any romantic development after all. It's a shame but I suppose this is just another food/friendship manga.

I really don't think you've read this manga correctly, otherwise the not-so-subtle yuri would've smack you right in the face. This is a slowburn yuri, not a "Sex on page 6" yuri. If the "This is an honest-to-goodness-love" line didn't sell to you as a yuri, i honestly don't think slowburn yuris are for you.

I knew this development would happen ever since Nanaki told Izumi the biggest lie of "i jUsT wAnT TO The BEsT of frIeNDs witH hEr" and it was not a hard one to predict at all either. I mean, it was obvious that Nanaki needed a Random-kun to try to woo Kurokawa for her to show her true feelings.

Next chapter we'll probably get Nanaki spying on their date, misinterpret something that happened and act cold towards Kurokawa afterwards. I just wished there was more Izumi x Iroha development going on, those two need more time alone together.

Author's name made me expect something way different. This is nice though.

It being Teacher x Student is just as bad in this context, if not worse. You're simply replacing the incest with a teacher abusing the shaky mental state of a child to have her way with her, while literally getting off on the wrongness of it all.

This is exactly why i feel uncomfortable reading this story. I don't really like the direction this story is taking, so i guess i'll drop it for a while and see if its worth catching up once it ends.

Useless Princesses is doing the same "We're just BFFs!!" tactic and it didn't connect with me, maybe it was the tone of this one that made me go "Awwww, she's so adorably stupid!" and the former one made me rage.

So, from what i gather Kurokawa is like those weirdos that ship real people, but since she also likes Nanaki she feels like she's crossing her own bounds or something like that. Also, i always thought Nanaki would be the one caught with a guy and spark some cliche misunderstanding, but hey, i like the fact that Kurokawa is not the one suffering for once. I'm probably one of the few people that likes how overly dramatic the stories from this author are, it feels like i'm watching a lesbian soap opera and i'm all for it.

I might hate Saburouta's writing (Or lack of it) skills, but i have to admit that she can make some beutiful illustrations from time to time. I honestly hope she does a collab with a more competent writer in the future, cuz her art its the only reason i keep reading Citrus.

Petition for a spin-off series of the short haired girl. She deserves some loving as well!

Kal3d
5 Seconds Before Falling in Love with a Witch discussion 13 Aug 16:14
Quote

Awww, that was soooo goddamn cute. We need the threequel to see them getting magic babies and complete the perfect trilogy.

Ooh this got so good in just a few chapters. One thing i'm dreading though is that it feels like the end is near. I mean, we already got the first kiss and the first night together and even the first bath together. We just need the first fight, the first reconciliation and the first trip together and we're out of first' to extend this story.

We're all allowed our own opinions. And I fucking hated this. It feels like kissing Jessica Stein but worse, with less explanation, and multiple couples. That last chapter is so damn preachy. Like "hey reader you're not allowed to hate this ending because it's realistic now watch two lesbians wax poetic about men and their mother." No, fuck that. This sours the whole series. If there was ever a game of thrones yuri, this would be it. "Lesbian couples don't always work out" is the iron throne and "it's all thanks to your mother" is the dragon that burns it. It's convoluted, messy, and deliberately placed to make the reader feel stupid for wanting the couples to work out. This doesn't even feel believable. It reeks of word of God and I hate it. I hate everything about this. I feel sick to my stomach. At least I didn't watch game of thrones, but this one had me fooled. Guess I'm the idiot.

I guess you didn't liked this one. But for real though, i agree with you on a lot of things, especially the "LEsBiAnS dOn'T aLwAyS wOrK oUt" stuff this final chapters slapped us in the face with. Like no shit sherlock, but guess what, i'm reading fiction to run away from the harsh realities not to be reminded of them. These last 2 chapters did kinda soured the entire series for me too, because all those cute moments some of the ladies have with each other amount to absolutely nothing since in the end they lose out to nameless randos and we're supposed to just say "Yeah, that happens in reality so i guess this is a good ending actually."

This started out with a lot of potential, but Axe-chan kills another one yet again. Well, i guess 2 out of 4 couples ended up together which is the only good thing out of this whole mess of a rushed ending.