oooooh i love ch4, i love the trope of guy questioning his sexuality after seeing a cute guy crossdress and i love the interplay of reality vs fiction. i also love the star wars quote lol im really rooting for this dude, i hope this story continues and we see more of him

god i love this manga. the energy is just breathtaking

gamagoori
My Wish is to Fall In Love Until You Die discussion 22 Aug 15:03
Quote

more of the nurse sensei pls

i want a dick pet they look so cute

it ended pretty abruptly and wasn't as good as teppu, but i think that it accomplished its main goal of portraying a huge underdog victory pretty well. the fight with nina had me super engaged. i think of it as a glittering crown jewel on an otherwise unremarkable crown.

beautiful with a refreshing art style

to all yall talking bout cheating and being loose........it's called Casual Sex and there's nothing wrong with having it

gamagoori
I Love a Beauty with a Harsh Gaze discussion 07 Feb 12:21
Quote

i NEED a full series

beautiful and sweet....love the way the artist draws lips

fuuuuuck im craving omurice right now. and this chapter is so relatable honestly cooking is so hard

oh koharu they can definitely teach you abt romance ;-)

also, that cover page is cute as FUCK. mikochi's hair and pose are absolutely adorable

gamagoori
Me and You and Her Sofa discussion 14 Aug 16:09
Quote 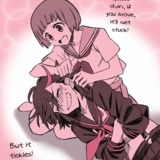 this art is amazing and the character designs are so varied and likable, ESPECIALLY delinquent girl. thin eyes ftw. after reading series after series set in high schools where the only variation in character design was hairstyle, height, and boob size, this is such a breath of fresh air. and the art may be "rough" but you can tell that the artist actually has a really good grasp on human anatomy and gesture, which is pretty rare in manga in my opinion. i have read so many series with flat, amateurish, anatomically inconsistent art and seen people praise the art in the comments just cause the lineart is clean. la bian by shiduki michiru is one example.

what a creative twist on halloween. the adults get to dress up and make fools of themselves instead of the kiddies

gamagoori
Between Philia and Eros discussion 30 May 23:49
Quote

literally who gives a shit if a girl has a lot of boyfriends. it's 2017 she can do what she wants she's literally harming nobody.

i relate a lot to hoshigawa. ive had a couple of crushes in high school that other people would call sluts just because they dated around and i myself have been called a boy-crazy slut just for having a lot of male friends (im lesbian so that insult isnt even remotely applicable). like i said, it's 2017. the notion that having a lot of romantic partners is a bad quality in a woman stems from the regressive, outdated, misogynistic idea that non-virgin women are tainted, and yet slut-shaming is still really common. there's nothing wrong with sleeping around, even if a girl had a different boyfriend every fucking night there wouldn't be anything wrong with that. people need to stop caring so much about what goes on in other people's bedrooms and let a girl live her goddamn life.

A child's feelings on the matter do not give them some extra-judicial right to consent to sex. They're still a child regardless of backwards places deciding that it's perfectly fine to allow adults to take advantage of children.

My point was, I really doubt teacher was taking advantage of her and she was most likely the one to initiate things. Still further clarification from manga needed.

The parts of the brain that are relevant to decision making don't reach actual maturity until around age 25, so 16 is not borderline adulthood and thus open for whatever adult feels like creeping on children. I don't know what nostalgia or image you have of sixteen year olds, but they do not have the world figured out and are thus capable of engaging in complex and potentially abusive relationships with adults.

In my country you are a legal adult and can do w/e you want when you are 18 so yes, 16 for me is borderline a adult. Also again, I said I'm assuming it was mutual and there was no "whatever adults feels like creeping on children".

I'm not ok with putting all the blame on teacher, when she clearly wanted to fuck teacher. If we will learn later the situation was more dubious then I'll take my words back, but for now I don't see a good reason to remove all responsibility from her actions.

you're either underage, extremely out of touch with anybody under the age of 21, or a creep. it doesn't matter what the student did, the teacher agreed to have sex with her and that is a crime because 16 year olds are not mature enough to enter sexual/romantic relationships with older people. i'm a senior in high school and when i interact with sophomores at my school i notice that the maturity gap between us is huge. they're only 2 years younger than me but teenagers grow a hell of a lot in those two years. i guarantee you, you put a 16 year old and a 20 year old in the same room and the 16 year old is basically a child compared to the 20 year old. that's why it's statutory rape. there is no "responsibility for her actions" she was taken advantage of by someone with LEAGUES more maturity and experience than her. even if she was seducing the teacher, the teacher is an adult who should have the moral standing to know that this is a child and she should not agree to have sex with her.

so she was involved with a teacher and the STUDENT gets a year suspension? like in what universe is statutory rape something punish the victim for, especially with an entire year suspension. i'm sure the teacher got off worse but why would you even bother punishing the student?

Nowhere in that section does she say she was suspended, or that the teacher wasn't punished. She just says that she spent time out of school, which makes sense. If it gets out that a teacher and a student are sleeping together, it's likely that all kinds of factors would point towards the student taking time off and perhaps switching schools, for her own benefit, regardless of any punishment the teacher receives. Going back to school where something like that is widely known would be very unpleasant for her and even her family, especially in a society as scandal-averse as Japan.

the page said "took a year suspension from school." it was pointed out that the japanese word connotes a voluntary leave from school so then it made more sense to me, but "suspension", at least how i've always heard it used, means a punishment.