It's important to consider that Japan, the source of most of this manga and anime we consume is actually less LGBTQ+ friendly than a considerable number of western countries. There's culturally acceptable phenonema like S-Class friendship and yaoi which can have very little to do with actual LGBTQ+ representation. Anime also subsists heavily on disc sales, they can't risk alienating part of their audience.

Manaria friends: Part of a larger franchise often featuring male protagonists. Declaring those two 'off-limits' to the PC could hamper people's interest in the series.
Yuru Yuri: Literally means something like soft Yuri. It's designed to tease. The author doesn't shy away from clear gay stuff, it's just not the focus of the series
Amanchu: The 'perfect couple' was supposed to be friendship all along and in her panic of writing a relationship that could be construed as more than friends the author had to create a love interest whose only purpose was to show those two were really friends and nothing more.
Izetta, Akuma, Flip Flappers. I'm.... pretty sure all of these are confirmed Yuri. Kisses were probably just avoided in Izetta and Akuma to draw a larger audience / avoid alienating or pidgeonholing the series.

I mean, Flip Flappers had an entire episode dedicated to Cocona trying to pin down her attraction to Papika. They openly declare their love to each other multiple times. No kiss was a disappointment but the girls had a wedding dress moment.

When consuming Yuri, it's important to keep in mind that the genre was born in a culture with different norms and quirks. It's a genre that's evolving to this day. Maybe one day we'll see more kiss scenes that are designed for tittilation of the audience but a confirmation of affection between two characters.

More notable details:
We've seen three (potentially four) different chihayas now based on hair and clothing choice. Schoolgirl, mafia! vest, tuxedo and possibly stalker.
Ouka has different flowers in her hair in the first chapter, the ghost ouka in the opening of second is wearing a ring, but they otherwise seem to be the same.
Tuxedo Chihara from the first chapter didn't start out with a blade, but a gun, unlike the other chihayas.

I like the pop idol and Aikatsu references in ch 3, but are the chapters out of order already? How is it that the end of the latest chapter goes for a loop. It certainly got the wtf tag for me.

Chapters aren't out of order, things seem to blend together on purpose. The missing girl from chapter 2 is here in chapter 3 as an idol. It appears time between stages doesnt' behave in a linear fashion.

Also notably, the stalker has an Ouka-obsession, black boots and catkin blade just like Chihara and is thus likely a later Chihara.

More likely bi. All of the bi women I know ended up married to guys eventually.

Why I'm not surprised to hear that.

Maybe because the simple rule of statistics means a bi woman is far more likely to run into a man who is interested in her than a woman? Not to mention that in many places of the world it's still far easier and often safer to marry someone of the opposite rather than same sex?

Lets not be biphobic, please.

We already have some light novels on the site, and a light novel tag. Like https://dynasty-scans.com/chapters/dream_and_reality

Pyoro raises a good point though regarding the font thing. For pure text LN releases like this one, an alternate solution could be found maybe?

Gotta be a family member (step-brother, half-brother, cousin or such).

I thought the same thing. The story lays on the idea that she's cheating so heavily that it'd just be too obvious for it to be true.

The guy with the bicycle appears to be the same one both in the two months in the past bit as in the present. Probably that neighbour she talked about.

The raws literally only arrived a day ago. Unless you want a shitty, uncleaned translation I suggest you patiently wait some more.

Lack of awareness and knowledge about female pleasure and the sexual organs.

Not even mostly they're own fault, really. The knowledge is out there but nothing in an average young man's consuming of knowledge makes them even aware of the issue unless they make the mistake with a woman in the first place.

Maybe the author has some first person experience?

That'd be hot if they were both girls.

Regardless of the gender of the people involved, this manga is depicting rape and abuse. It's fine if you've got a kink for that but don't bloody wish it onto a real person then.

Except that's probably that the measured hand length given here is from an adult woman, those sugar/fat lethal values are for injection not consumption and also...

I doubt Rin's carrying 40 kg with one hand? It's probably just a ten liter bucket. 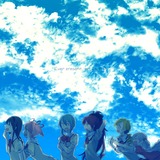 Is it me or are they in the poses of the Kindred Spirit's menu screen splash?

X-thriarchy doesn't mean that the X gender can act as it pleases. It generally only means that leadership is restricted to X gender. Just because it's a matriarchy doesn't mean the society doesn't have strong expectations of women. I mean... Surely you've heard of such ideas and opinions that a boy needs to have slept with a woman to become a man?Menstruation, pregnancy and birth are also occasionally seen as 'truly feminine' things even in modern feminism which kinda stings for maab trans women.

Finally. Comedy is used to lighten the mood and give some breathing room for the reader in an otherwise unpleasant thing to read. Guy's pedophilia and his choice not to act on it is also not the sole defining feature of the character. 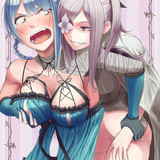 Kaine's intersex, her having both sexes is what leads to her isolation ingame.

The USA isn't a bastion of education either, not to mention it's entire culture is different from Japan.

No one would want to be thrown suddenly into a foreign nation with an alien culture while having a poor grip on the language. 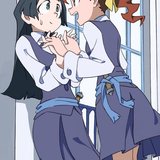 They also share showers, if the fairy revolution episode was an indication.

For the sake of others like me who were confused about ChaosTeam suddenly posting to dynasty, here's their message from facebook.

"Well hello fellow fans of the yurigenre. We have some news for you. After looking into the matter for a few times, we now came to the decision that we will, starting by today putting our works on Dynasty as well. So starting by today you can also read our works there. For now there are only the chapters of "My unrequited love" but we will add bit by bit all the rest(at least thats the plan). Still for the future you will find the new releases first here and then on dynasty. I hope you all enjoy this new possibility off reading our works somewhere else as well."

Spoilers are probably best maintained for newly released episodes, since it takes a day or two before everyone gets the chance to see them on their own.

If you're half a season behind, well...

Spoiler:
And yup, looks like Sucy feels at least some more-than-friends affection for the crazy comedy gal, though it's heavily suppressed and would've instantly been squashed if not for Akko's actions.

It is good to note that their first meeting was shown in a detailed, non comedic style and that yuri sucy never was attacking akko during it's rampaging, just following her

What turned me off about the latest LWA is how many people suddenly starting shipping the opposite chromosome characters when Akko forgets all about any attraction in a flash to friendzone the dude and Diana probably wouldn't care if either of the two dudes died in a car crash.

I found the previous chapter to be a bit meh but this one, wheh!

Maybe subtext? Snowgirl's getting her proper introduction, but it feels like some of vampire-chan's crushing on her has been cut.

Gabriel Dropout: I don't know whether to hate Raphiel or love her. She seems like a sadistic bully, but on the other hand it feels like she could be in love with Satania...

She is a sadistic bully, she just found in Satania the perfect victim. So now her world revolves around Satania('s suffering).