eibon06
The Two Sides of Seiyuu Radio discussion 06 May 17:21
Quote

I'm waiting for a yuri development to read this.

It's pretty clear that she's from a failed marriage by reading the page 00526.

So not eating, having a bad lifestyle and being depressed = being in shape.
Manga you are drunk !

Finally they recognize her acts as rape. It's been few chapters that Satoko force her way on Masumi. And F*CK NO Masumi shouldn't apologize for anything.

I'll never get over the fact that the cover is not an actual doujin/series. Is probably one of my most favorite yuri illustrations of all times

Even today it's still one of the best illustration for a yuri magazine.

Ah drama, my sweet sweet drama .... At least Chinami have the guts to see clearly what she think of her / of them and to put an end at their affair / relationship. Let's see what Yukako will do. I'm hype o^o

eibon06
I'm the Villainess, but the Heroine's Trying to Capture Me?! Anthology discussion 26 Jan 15:09
Quote

I think it's pretty harsh to generalize all rappers in this way.

I just made a melting up of two different language but you get me.

I think it's pretty harsh to generalize all rappers in this way.

I think they meant rapist

This ending ... Why !? OK author so if this is your ending then let me put the final dot.

Kuro and Miyabi have a lovely, solid and respectful couple
Her friend from overseas married a foreign guy.
Reiichi married her waifu, Risako !
And Uta still have her f*cking unrequired love for Kaoru and can't move on. After finishing her study and getting a job they decided to live together. Better be near her than letting her find another man. Sometimes looking at Kaoru make Uta sad because she know she will never have her feelings reciprocated but she remember that now the two of them are roomates/good pals so we can say that they are like a couple after all they live together ! And to cover it up they also decide to live next to Reiichi and Risako and be happy. After some times Risako will have her children and she will let Kaoru look after them and the children will consider Kaoru like another mother. But then we will discover than Kaoru still have feelings for Reiichi and she only decide to divorce of him because she was feeling guity about what her mother tell him before she died. And then Uta will discover that Kaoru and Reiichi have an affair and she will decided to marry a guy and leave Kaoru have a treesome with Reiichi and Risako. Moral being gay is too hard.
THE END. (Ok it's ridiculous)

Honestly better that ending the author give us than nothing.

Liked it, but I hate when “virginity” for women is based on whether or not you’ve had sex with a man.

Same, it's like describing woman "virginity" like a garanty stick where only dicks can pop it off.

This need a sequel 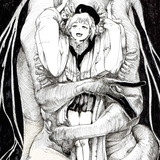 I'm disappointed. Okay she was het from the very beginning so it's logical she ended up with a guy. But come on she could have also stay friend with him and show a another type of relationship between man and woman. The author did it when she was younger... I know it was made this way to give a happy end to everyone but I didn't expect this to be a couple and make a child.

So it's about time to add the tag Bisexual, no ?

I really like the fact that the book Tokono-sensei was reading on the first page is one author's works. Beside that Saeki-san really give me the vibe of a straight girl playing with a lesbian just to amuse her. Goob job author !

One of the Dark Yuri's partisan

eibon06
This Channel Has Nobody But Us discussion 24 Jun 16:11
Quote

so frustrating ! Why does it have to end on the best part --'