Honestly, I think I'd prefer it better without the Yuri. A woman just finding inspiration in the most unlikely of places and at the same time becoming a good influence in someone else's life.

Teleporting to their inventory

Well, it's a seemingly rather deep inferiority complex, it's not really something you get over with the push of a button no matter how many kind words your GF throws at you. Even if it gets better the niggling thoughts will still be there, and occasionally you will listen to the voices despite how much you know they are wrong. For what it's worth I think it's a rather realistic approach to such issues, even if I get how annoying it can be in fiction.

The fact that Yamada didn't run away from the issue and instead decided to stay the full time anyhow seems to suggest she has at least learnt something over the years, even though she's not over her problems yet.

Man, it was a good thing MC-san's in love with Miku, because going straight to groping and sexual assault without consent is a VERY risky maneuver... oh well, logic checks out in Yuri Land

I'm so glad I'm not the only one who saw this! Some of those lines just rubbed me completely the wrong way, it would've been near Weinstein-y if it had been a young man saying them rather than a young woman.

This latest arc, and the end of the Mai-storyline, really made me fall in love with Chidori's character again. She's the type of person who's selfless to a fault, and as someone who's constantly accused of the same I so identify with her and love her all the more for it. She would help Mai find closure with her love even if she herself didn't like it, that takes some strength and courage most people wouldn't be able to muster.

Not to mention Mai's courage. Like people here have said, she keeps running away. She keeps holding on to the What-Ifs, Buts and Maybes that would allow her love to flourish in her own fantasy. Yet she keeps bashing herself over it, she keeps telling herself she shouldn't be doing this while at the same time being unable to let go. She would much rather suffer herself than try to get in the way of the happiness of the one she loves, that's strength! Yet she finally lets go of that for a moment, finally selfishly confessing in order to give herself closure. She know she will be rejected, because she know how much Nanoha and Chidori loves one another. It's closing a chapter in her own head, finally being able to throw the towel into the ring and being done with it. It takes courage to finally take the step to let go.

I will admit, I never expected to get this. Now that I have though I find myself desperately wanting for more.

I'm not sure what I thought I was getting into, but this certainly wasn't it. My day is immeasurable and my disappointment is ruined. 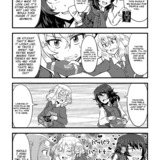 To properly charge energy from the Tsun you need some Tsolarpanels

This one is REALLY pushing the Yuri tag, to be frank. It's barely even subtext. 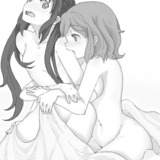 Luhood
About a Lazy High School Guy Who Woke Up as a Girl One Morning (web comic) discussion 07 Dec 19:50
Quote

And Nozomi awakened to masochism

I want to read this now, please! 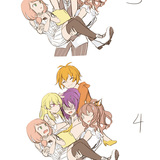 "This lady can carry so many girls!"

Or are the rest of us dense, and she isn't actually dating her senpai at all but just want to invent excuses to kiss? These are the true questions, people!

Bandaged girl will wind up going to an orphanage, committing suicide or killing herself.

Well aren't you lot a bag of sunshines...

In all seriousness though, this had a certain tone to it that I liked. It was nice. 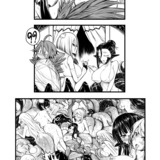 Throw her into the snake pit!!

So subtext it pops out on the other side.

I swear, those two can't get any more gay unless they actually kiss. 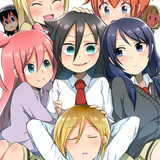 "It's not my fault I got a yuri harem"

Short and simple, I liked it!

Luhood
Happy End For You discussion 28 May 07:00
Quote

I was waiting for and expecting a violent retaliation. Maybe slamming her head into a desk and going "Next time you ever go near her again you won't be walking out!"'

I wasn't expecting maximum Yandere, that caught me off guard.

"They did lots of work afterwards"