I'm getting rather sad that every other character in manga are obsessive about their diets, from growing teens to the oldest main characters we get, who are like... 32? I get that this is probably reflective of reality to some extent, but I would find it a relief with someone who went "fuck your diet, 'skinny teenage girl' is not the beauty ideal you think it is"

You're taking the scene way too literally. First of all, I don't know the exact japanese in the original, but you routinely see "attack" in manga referring to consensual sexual advances. She isn't literally saying she's going to sexually assault her, she's saying she's going to make a sexual advance. I don't know how anybody reading this comic could think Kanda is the type of person that would force herself on Ookuma without consent. You are conflating an absolutely innocent scene with people who make excuses for actual sexual misconduct.

She's saying "If you strip in front of me, I'm going to want to do stuff to you." Ookuma then -literally- says that's the plan, and that she will consent if that happens. Then she does strip, and Kanda literally asks for consent directly despite the fact that she already has it. There's no assault here, nor threat of assault, or anything approaching a threat of assault. Just two absolute dorks nervously approaching the concept of maybe wanting to do stuff to each other if that's okay.

You are jumping at shadows in a well-lit room here.

Oh, I'm not talking about this couple, they seem lovely (huge lie aside) and there's clearly consent there. For me, though, a romantic sequence where the dialogue is saying, over and over again, "hey, remember how all men are rapists" without criticizing that norm is disappointing.

Now let's pull up a chair and have a conversation about "rape culture".

There is no point so you can put your chair back where you take it.

The notion that "if you do x I won't be able to control myself and will sexually assault you" is a lie made up by people who either want to excuse rape or put the blame for it on the victim. Empowering rapists is what I would call a problem of rape culture.

On the one hand, ugh. On the other, this is the ending I take as implied for pretty much every manga set in high school (or "before real life begins"), and as the expected path in Japanese society.

Now let's pull up a chair and have a conversation about "rape culture".

In this essay, I will analyze and critique toxic relationship tropes.
starts up episode 1 of Revolutionary Girl Utena, shuts up

I'm afraid she is in severe breach of the regulation for the care of doggos (in Sweden).

Let's be clear, though this was the first time Tazune assaulted Midori, he's been abusive pretty much all through the series - you do not constantly denigrate your partner's intelligence to be nice. And the sex scene, obviously.

Robert Putnam is rolling in his grave over this chapter title (163)!

What I have a beef with is that it's yet again a manga with a catalog of LGBTQ+ people, all conveniently grouped in a single place, who are, conveniently again, learning about how to be comfortable with themselves, and are, conveniently, receiving life-lessons from various nice people. Nothing wrong per se with that, but it's a bit angelic.

Conflicts are magically resolved, bigoted people who spit in the face of, or beat up gay couples because they dared to kiss basically don't exist. A few dialogs and lo, everyone becomes tolerant, or discover their own identity. Gay people attempting suicide or losing their home doesn't seem to be a thing. "All you need is love and understanding!" (cue for a frog to play a mandolin and sing)

As if... we are talking about Japanese society here. Not really a gay friendly society.

There's nothing stopping you from reading, say, Claudine, or Pieta, or any manga with the tag Aaaangst, or whatever. There are plenty out there - there's a reason there's been a backlash against tropes of dead/evil/"crazy" gay people in media, and it's because it's been so much in the past. The thing that stands out with this manga is both that it's grounded in reality, unlike most manga on this website which both ignores homophobia altogether, and usually puts the story in a high school setting which everyone can pretend is separate from the real world, and that it's positive.
Usually you get unrealistic works where you suspect that they leave plenty of space for the characters to not continue with same-sex relationships when they graduate, or you get a realism where the characters end up unhappy or dead. I'm plenty happy to see good representation and a positive message.

Adults! Doing adult things (like dealing with their emotions and fears in a mature way)!
So great ;_;

The Scottish dialect was a good and creative choice, certainly better than how dialects are usually treated! Since people are having trouble, maybe add a short dictionary for the phrases people have the most problems with.

As someone who likes sports manga and anime, I am loving the fact that this is a sports manga with a female main character that ISN'T just an obvious excuse for producing wanking material. They're few and far between.

Hibike! Euphonium was the most blatantly queer-baiting show for two seasons, so I'm honestly a bit surprised at the people who were surprised/disappointed by it! At least they were (to my eyes) upfront about it by making it clear that Reina was deeply and passionately in love with Taki-sensei. There is a meaningful yuri narrative that could spring from this, but I didn't think this show ever demonstrated an interest in such.

You know whats funny about this whole "love" she feels for Taki? That the same thing people used to describe her relationship with Kumiko (Its just a phase and whatnot), could be said about falling in love with a teacher, but since the teacher is a guy, this one is the real deal.

Oh, don't get me wrong, I definitely don't think what she's feeling for Taki is One True Love forever or whatever, just that in the context of this show, I didn't see much reason to be optimistic about romance between Kumiko and Reina.

Hibike! Euphonium was the most blatantly queer-baiting show for two seasons, so I'm honestly a bit surprised at the people who were surprised/disappointed by it! At least they were (to my eyes) upfront about it by making it clear that Reina was deeply and passionately in love with Taki-sensei. There is a meaningful yuri narrative that could spring from this, but I didn't think this show ever demonstrated an interest in such.

I've started to picture Yamada's reactions as being quite like this character's:
http://images.geeknative.com.s3.amazonaws.com/wp-content/uploads/2014/10/time-of-eve-robot.jpg

There are two ways this can go, and I don't particularly care for either of them :( 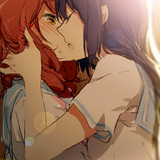 I agree, grinseb, it feels pretty obvious that KyoAni do not see Kumiko x Reina as a real option - which is too bad, because they have some really powerful scenes together which turn a bit sour when they try to jam some yuri fanservice* in there.

*in the worst, girls-kissing-on-the-dancefloor, sense

Too bad there isn't all that much of that. We have opinions that are neither explained or even well thought out. And we have people -- including you -- using this story as an excuse to get on a soap box about their personal beliefs regarding ages of consent and will-somebody-think-of-the-children and hiding it under the fig leaf of criticism. Probably because they don't get enough visits if they post their diatribes on their tumblr blogs instead.

In this doujin, we have an adult authority figure using her position to get alone with one of her underage students, doesn't respect the student's physical boundaries, uses cheap tricks (such as being physically intimate with another of her students) to confuse and upset the student, and of course makes no bones about pushing emotional intimacy on someone who's immature, confused, and under her authority.
It is by no means impossible to write a romantic teacher-student story, I'm pretty sure there are a few on this site. But this is not one of them, because the teacher acts in a way indistinguishable from a predator. At best, she's an irresponsible spaz who leaves a trail of broken hearts among the teenagers entrusted to her care. That would be bad enough, and I find that a charitable interpretation.

I should hope we take manga seriously, in the same way that we take comics, anime, movies, books, games, and other forms of art seriously. This does not mean that we can't enjoy fun romps and any number of silly/strange/stupid stories! But criticism and talking about art can make it better, so I'll definitely keep talking about and critiquing culture I care about.
Note that I have very few comments on this site, usually I don't feel moved to comment, but this particular work was egregious enough that I felt I had to.

This seemed more like grooming than most age gap/student-teacher stories. So... that's not great.

It really is great! I skipped it back when I was religiously reading everything Lililicious put out, because I didn't feel like a long, heavy series at the time. But now it popped up as a random chapter here and I couldn't stop reading.