The soft strokes of the artstyle... aaaah so nice..

the melting point of table sugar is 186 C, that's quite toasty
but so is their love <3

Aww. Sweet like soda. How poetic, I love it! Thank you to the team that scanlated this!

Damn, that was actually really good

Agreed! Pretty sweet towards the end. Bite-y Maya is cute Maya. Dk if people would like it here, but petition to bring it on Dynasty too for completions' sake :smirk:

While this isn't my fetish, it certainly isn't the worst thing in the world. There are plenty of disturbing, and outright harmful, paraphilia out there that people have an astonishing lack of self awareness about. I don't really think it's required for something so self-contained. Barring that, this is a fictional work centered around a fetish, and really shouldn't be belittling it's intended audience by being ironic or self-aware. People don't want their kinks being criticized while they're trying to get their rocks off.

You know what, wacky serial prostitution consumption aside (hey, we all wish we could be Asumi at some point) this series portrays sex really well. The chemistry, positions, angles, yummy artstyle...I think that's what I like most about it. Never fails to serve them lewds well despite the shortness of the page-count. 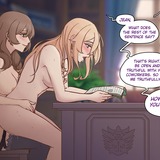 smileyfeiC
Does It Count if Your First Time Is With an Android? discussion 12 Oct 07:51
Quote

The more highly advanced the robot is, the greater the concern that it's sentient. So the more similar a sex robot (i.e. a robot whose purpose is to provide sex, and is not allowed to refuse) is to a human, the more similar it is to a sex slave as well, in practical terms. Nadeshiko is very easy to mistake for a bio-human, even if it's unclear if she's actually sentient.

This could be a reason for a legal ban of realistic sex robots, and a the reason why Tsuda may feel bad about leaving Nadeshiko in "sleep mode" longer than necessary. Powering off Nadeshiko any time she doesn't "need" her (e.g. for sex, or companionship) might feel like denying any semblance of individuality or agency from her, perceived or real.

An interesting interpretation that'd explain a lot. I'd like it to be explored more in the story, but I fear that this manga is much more interested in wacky hijinx than in questions of sentience and humans' relations with the AI...

I like how strong-willed the MC is. As someone who also gets a lot of negative emotions often, I find it hard to keep sight of what matters to me. Seeing MC do her best to fight it and see things in a different light makes me admire her strength. (These are my thoughts from just the first chapter) 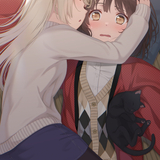 Another case of the useless lesbian couple trope, always a treat! Excited to see how this goes ^w^

Also that Bloom Into You reference HELL YEAH

Foolish, foolish , FOOOLISH! How could you ever think being secretly a catgirl is a detriment?! That only gives you six times more appeal! It's like saying you can't be together because you are secretly a star athlete or rich.

damn, last update was 5 years ago ;w;)
did anyone pick this up? might need to change status from ongoing to hiatus/dropped or something

smileyfeiC
By My Side discussion 25 Sep 00:54
Quote

Sorry but this person posting random mantra shiz is making me laugh. "Black magic to kill enemy in Austraila" really? It's a trainwreck but I keep cackling wwwwwww

A bit of a clumsy take on the kokoro-misaki dynamic, but well intentioned I guess. Double suicides give an impression of desperation, of wanting to escape the life one lives in so both can be together.. perhaps forever. Using that in the title made me expect some sort 'rage into the night' type, but to be given the "living a listless life, then falling in love, and finally finding something worth dying for" puts an unexpected perspective on it. I'll admit it was pretty out of place when Misaki asked Kokoro to commit a double suicide, because well, things are going well between the two of them and they just came from a successful performance, where'd that come from. Felt like just a set up for next lines: "Just a little longer.. until when?" "Until death!" Admittedly though, it left a warm feeling. To commit suicide is to succumb to the pain of life, and to wait together before doing it... until death... means you want to hold on and continue to weather life with them to the bitter end. Or something like that. Might just be overthinking this HAHAHAHA

man, this manga made me miss touring on my bike (bicycle)
ahhh.. to ride around, eat different foodstuffs, see new places with someone you cherish.. must be nice

this manga did great at capturing that. how your world grows bigger when you get to experience local places. the feel of the roads, ascents, descents. adjusting to weather changes. nothing beats touring on a bike vs the typical tourist style with a transport.

the story is great. i loved how everything felt natural between the two of them. art is amazing too. off to my favorites you go~

smileyfeiC
About a College Girl Who Gets Picked Up at a Mixer by an Older Girl discussion 22 Sep 03:03
Quote

This manga is still ongoing, up to chapter 45 now. Previews can be seen on Yukio Yuki's twitter, though the full ones are on a site that only allows Japanese IPs. Even after managing that, all chapters after 12 require an app to read, aside from shorts that are also posted on twitter.

Which site is it again?

Had big shit eating grin the whole time I was reading this. How could I have missed this when it was released! Loved it!

I'm just gonna go ahead and pretend that Mai is just pulling a whole ass prank here, and when proven otherwise, will proceed to ignore canon for the sake of my moral conscience.

I like how this is one of those series where the forum discussion is arguably more entertaining and certainly had more thought put into it than the actual manga.

Lol
This is so true

Just as much unnecessary drama, though.

I'd say the forum has more

"Well I am your older sister! Plus I'm your girlfriend, and right now, your newlywed bride!"