I smell this was all planned by Miku. Involving both senpai to make Kyouko jealous.

I spilled my spaghetti at 'Ass shop'. I feel like a 12 year old.

Good grief, reading the comments is giving me a headache. It's like the time when I went to the ECU with a broken leg and there was this 16-ish kid, who called the ambulance on himself because he threw up, had a headache and was feeling dizzy. When he went in, the doctor let out a scream: "What do you mean you didn't know drinking too much alcohol could cause this? It's called being drunk!"

Radzeer
The Inferiority Complex is Not Over discussion 25 Oct 01:24
Quote

Who in their sane mind leaves a little kid with a woman who owns games about raping and confining little kids?

You know that playing Fifa doesn't make you a footballer neither playing CoD or Battlefield make you a soldier right ?

If you're into women or men, then obviously you'd be a rapist.

I don't think that tracks. If you have an occasional rape fantasy that's no big deal. However if you get to the the point where the rape fantasies are dominating your thoughts then, let's face it, you want to rape some one.
We are talking about someone who is seriously into loli-rape. I don't think that necessarily means she will act on her impulses, but judging by her thoughts the desire is there. And I definitely would not leave my young daughter in her care.

Similarly, if you're into cat-eared girls, you probably want to mate with female cats and dogs.

Radzeer
The Inferiority Complex is Not Over discussion 24 Oct 01:13
Quote

Who in their sane mind leaves a little kid with a woman who owns games about raping and confining little kids?

You know that playing Fifa doesn't make you a footballer neither playing CoD or Battlefield make you a soldier right ?

If you're into women or men, then obviously you'd be a rapist.

Similarly, if you're into cat-eared girls, you probably want to mate with female cats and dogs.

Seriously? An ambulance just for a scratch?

As a person who was run over by a bycicle, I can tell you it's serious business. I ended up with a concussion and some bruises, but I was dizzy for two days and limping for another week or so.

Why are people on Dynastyscans retarded?

Radzeer
Us, the end of the world, and after that discussion 04 Jul 02:02
Quote

oh no, there's more, at least one more :(
this has tragedy written all over and there's a woman without neck on her pixiv

That's a completely different story.The third installment is this:

Since Swap ⇔ Swap is one of my favourite 4-komas out there, I have been snooping around a little. I don't know how reliable these informations are, so take them with a grain of salt.

I still don't know what the gender of the author is (nor do I care about that), so I will refer to him/her as author. Now what I have been doing is basically stalking, but the information I collected is public via the Kirara Time Carat magazine and author's SNS posts. I will not pry further into author's personal life and I would like to ask everyone to respect the author and the situation and not to bother the him/her with further questions. I have learned enough to feel bad looking into it.

So first of all this:
https://imgur.com/a/htGploE

Announcing a sudden hiatus of Swap ⇔ Swap, some other series I don't know about and Hidamari Sketch in the next volume. The second is announcing that Swap ⇔ Swap will end in the next chapter.
My opinion is that this was probably not planned if it's so sudden.

After that I have looked up author's SNS. I will not list the posts, they are still up if anyone wants to see.
Around Christmas time author announced on SNS that the author's son had caught a cold and couldn't post because of the work schedule. After that came a lot of im@s posts and mentions of Comiket goods made by author, depicting a certain im@s character.

The next post is from 6th of February, when author announced the end of Swap ⇔ Swap. In another post author mentioned a health problem and working multiple jobs at the same time and 'various bad things'.
Or maybe the 'jobs/works' are simply referring to independent im@s works, plus taking care of a child and working different jobs could have been taking a toll.

After that author received an original copy of an artwork featuring Haruko and Natsuko from the Kirara Exhibition and was overjoyed. Author even told that he/she will buy this artwork of his/her favorite manga.
Again my opinion is that you wouldn't refer to your favorite work so fondly if you grew tired of it and wanted to end it quickly

In yesterday's post author mentioned that the situation with im@s and Kirara deteriorated and wants to draw Swap ⇔ Swap again. Also mentioned that several posts were deleted.

What I can put together is that the situation is complex, but I can think of some scenarios:
1.: Because of the health problems and working various jobs at the same time the author had to give up drawing for Kirara altogether, which probably doesn't pay well at all.
2.: Because of the health problems, Kirara forced the author to give up the spot in the magazine to fill it by someone who can submit works regularly.
3.: It could be that because of the released im@s goods at comiket, the author stumbled upon legal issues and Kirara just broke up the contract for Swap ⇔ Swap, because they did no want to deal with it.

In any case, my opinions are in italics, and are no facts at all, feel free to refute them. I would like to ask everyone again: please do not bother author with unnecessary questions, because the situation looks complex enough and probably involves personal life issues too. It is already bad enough that we will lose a fun series.

This exactly how normal friends behave, don't be fools, this isn't yuri at all. They are just normal friends.Totally normal and ordinary.

Dammit Tooru, you are going to kill me with our cuteness... 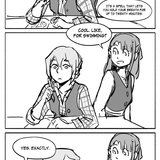 The funny thing is that the joke really fits Akko's oblivious personality perfectly.

That was absolutely adorable. Jealousy can turn into a green monster, but this. This is the best that can come out of that feeling. 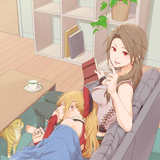 Is this before or after Chev mindrapes Vira?

This discussion encouraged me to go look for diversity on gender representation and I found a good article talking about some things related:
As a feminist, how do you feel about how women are portrayed in anime and manga?.
I recommend the reading, It has a lot of good mentions.

Ugh. The more time passes, the more I hate that Friedman woman.

Sakurako's dad is alive and kicking.
When the two go on a new-years visit to Sakurako's home, the dad drives them home from the train station and later back to the station again.
He even worries about them telling 'I hope you two don't fight at home' which gets Sakurako excited and tells Kasumi that she wants to have fight, because they never had one before.

So, both of Sakurako's parents have pretty much given their blessings. Good to know.

Sakurako's dad is alive and kicking.
When the two go on a new-years visit to Sakurako's home, the dad drives them home from the train station and later back to the station again.
He even worries about them telling 'I hope you two don't fight at home' which gets Sakurako excited and tells Kasumi that she wants to have fight, because they never had one before.

And I hope the subtext tag will be removed soon...

Heck they confess their love to each very nonchalantly later on...
chp 53 even has a kiss initiated by Kasumi. When the manager asks her about her most important person, she can only think about Sakurako.

At this point, I'm pretty sure the two of them are unofficially married. I know that's been the joke since the beginning, but it's getting a little too real to just be a joke anymore

Well in later chapters there are nonchalant kisses and the two of them saying 'I love you the most' pretty casually to each other. Plus they started living together at a flat when they started university. Sharing the bed and such.

Even Sakurako's parents were asking them 'I hope you two don't fight when you're at home' when they went home for a new-year's visit.

The only thing that bothers me is that Sakurako got a haircut later. She is slowly starting to grow her hair back, but she looked so pretty with long hair, I really miss it.

Lolicon and lewd things aside... 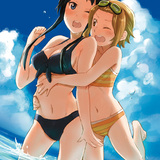 Why are you even here?

Why don't we give it a chance, huh? It's a nice translation and there was effort put into this.

I really like how most doujins portray Reimu as the assertive one. I really needed more ReiMAri in my life.

When Rina said "Shio, hug me" I nearly lost consciousness. Hisanari-san, you are killing me again.

Rina has to be related somehow to Kina from Wife and Wife.

She doesn't speak in Kansai-ben, so I doubt that. But yeah, she looks like a carbon-copy.