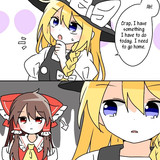 Another incident solved by the ordinary magician. 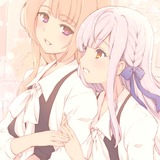 The new recruits for the Amber Teahouse look alright. 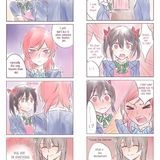 Kotori knows what's up and takes one for the NicoMaki.

This was no Sougou Tovarish, it wasn't very good. Glad is done, thanks for the translation work. The main couple were great I cannot remember the names or faces of anyone else because their only job for most of the manga was to just get in the way of the main couple. The Nekozaki family issue was so weirdly put together and awkward, and so it was the suicide thing. I hope Arata Iri takes away some notes of what didn't really work here and comes back with a more solid history because this for sure wasn't it.

I'm more convinced every chapter that this artist watched Yuri danshi crash and burn and decided to correct it and do it right.

Kasin
I Wouldn't Choose Her Even if the World Ended discussion 03 Dec 21:28
Quote

Have to give credit to the artist to be able to hit me hard on those last pages. I didn't sign up for this when I started it, I really didn't, but damn.. I'm truly happy that at least they ended up happy together at the end of everything. A drink for them.

It started great, I was so into it until around chapter 16. But then some things happened that took away my enjoyment. Every character that gets saved never grow as a character after the fact, they completely get back to how they were before, even after a life or death situation. The main character, I loved her so much, and then I just can't get behind the "I need to save everyone because it's the right thing to do", I'm not saying this as if we don't know the reason, (you can fill the gap yourself but that's not good story telling), I'm saying it because that's the basic rule when writing characters like this, you have to give them a really strong motivation to make yourself invested in their actions even the more when she goes to such extremes just to save a random person she never met before. It's like the artist has this many little plot lines but he never does anything with them, like he keeps doing with Komachi, she clearly has a reason to act the way she does but it's never explored. I don't like it either that in this school people die almost every day, as is the case with Conan that whenever he goes there's a master plan murder in the making. All of this can be answer but the artist decides against it and just keeping the status quo of "Usotsuki, it's telling a lie again!". Akira is great I'm sad she's stuck in this to be honest.

This had a very different feel and impact that other villainess manga, granted the other one has comedy and what not but it tries to appeal and do too much without always succeeding. This one on the other hand, feels more grounded and with conflict, and so far likeable characters. I actually do want to know where it goes even if I don't like isekai histories really.

Talk about a surprise. I didn't think I would enjoy this at all but somehow it has managed to be quite fun to read honestly. Rooting for the Maid or the Priest 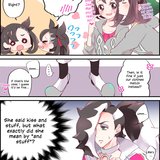 They're on a another league bro.

Well, that sure was a huge waste of time. Thanks for the effort on translating it until the end. I don't know if I was actually expecting something to happen, but the whole thing was a big let down nonetheless.

Been a while since I read some yuri that would make me tear up. Great story and thanks a lot for translating it.

Finally got around and finish it. I mean, the church scene could have been so good if it wasn't of the trashy build up to it. Rin's constant presence didn't help either since he was living in Yuu's house, I think that was a bad move on a supposedly yuri manga. I sympathize with the author struggles but the signs were there and the series weren't never going to meet the yuri audience expectations. Kind of a shame.

Thank you very much for the translation. It was incredible sweet and beautiful. The fact that this is official makes it even more perfect.

Nothing more to say than thanks a lot to the scanlation group for providing all the translations in such a rapid succesion. Outstanding work really. It'll be a forever mistery to me how this mostly flavorless manga at some point turned into such a precious thing that I always look forward to, minus the yaoi bits. Thank you very much.

i figured this could be a parody but I'm fine with that since it was pretty hilarious. 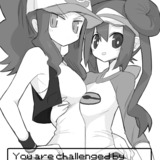 I still don't know how this pairing started, but I'm glad since the look really good together! Also, screw the localization garbage on Pokemon, thanks for keeping the original names.

Kasin
The Little Bird and the Brassiere discussion 04 Feb 20:28
Quote

Very cute and adorb. Thanks for the translation. 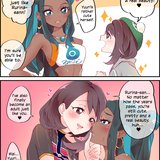 Oh my gosh, Yuuri's assertiveness it's too much.

I was about to rant how bad it was that you made that shitty meme translation, but then saw the proper translation as well. So thank you for that, I guess.

Thank god is not finished yet. Outstanding work so far really. Pretty well developed with a proper room for things to progress and not feel too convoluted.

Hey, thanks for using the original names.

Once again, thank you so much to the people finishing the translation. I'm so glad we got a glimpse of Yuu and Kanna's life as lovers. I'll always cherish this series.

Thank you so much to the person bringing back this manga. I can't believe that after 7 years I'm actually witnessing this precious moment.