Walk to Death by Ryouko — Ongoing 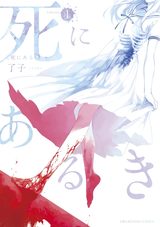 A wealthy man, Kurosu Tokimune, meets an unnatural end.
With his death, his family joins together to grieve, only to become suspects of a police investigation as to whether he was murdered.

Their primary suspect: the adopted daughter of the Kurosu family and first to discover his body, Kurosu Tokiko. The girl who shows no distress at her father's death.
And as all suspicions point to her, the second unnatural death occurs...

It's always been this way.
Wherever Tokiko goes, people tend to die.