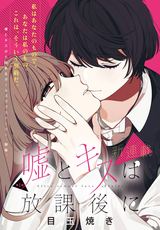 Thanks to a bad mother obsessed with men, Rin lost a warm house when she was young. The one who supported her at that time was the family of her childhood friend, Momoka.

...but, at some point Momoka began dating men, one after another, as she indulged in the feeling of love. Almost exactly like the mother that had left Rin behind.
"I won't be satisfied if I'm not loved" Momoka boasts. After she's admonished by Rin, she suggests "Then, you do it Rin. Love me, in place of a boyfriend".
And thus, from kisses and lies, begins a girls' love story.