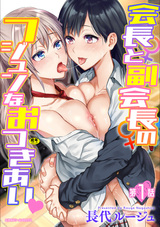 Student council president Miyuki and vice president Mako are known around the school for having a pure and honest friendship and rumor has it they're more than just close childhood friends. While the reality is that they are not dating, Miyuki has finally changed that by summoning up her courage and asking Mako out. The pure and girly Miyuki wants to start out by holding hands... but when Mako asks for a kiss, she finds it to be rough and intense before she gets tied up and pushed down. Contrary to her usual neat and tidy personality, Miyuki's body soon started to greedily beg for it. It isn't long before she gives in to Mako's continued attacks. With her perverted side finally exposed, she climaxes and wets herself. What does the future hold for their promiscuous relationship?