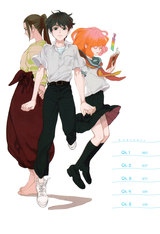 After recently moving to Onomichi, Hiroshima, high school student Tasuku Kaname is thrown into despair at the possibility that he may have been outed for being gay. Convinced his life is over, his despair turns into shock when he sees a woman jump out of a window of a nearby house. Tasuku races to the house in a panic only to discover that it's a public meeting lounge owned by the woman he saw before. Tasuku comes face to face with the woman as she walks past him unharmed, but not before she implies that she had been watching him from afar. Confused, Tasuku follows her up to the top of a steep hill where she offers to briefly listen to what's on his mind. Although Tasuku doesn't go into too much detail, he later accepts her invitation to come to the lounge to meet others with similar troubles.