I really like how this author executes plot themes about gender and sexuality so well while keeping it silly and lighthearted but oh so real. It doesn't necessarily have to be something very deep or profound, but the small things like how bluntly a character reacts to swapping genders and using it to their own gain (see "gender swapped fraternal twins"), in the end neither acknowledged whether they're gay or bi but the vibe they give off, the "hey i might be into the same sex but i'll take it in stride and experiment" is oh so good for me. Almost makes it seem like how the issue of being lgbt is not swept under the rug like most gl/bl manga but not handled so heavily either. 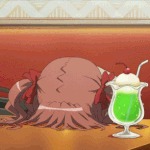 I'm so glad she finally just embraced the urge to write about all traps all the time.
I don't dislike Nanashi no Asterism at all but in retrospect it really feels like plain ol trap manga is all she wanted to do and god bless her I love it.