It’s hot and of course it had to be summer context blinders.

Too late to whale on EN server. Try again on the JP and CN servers.

She’s a vampire but her tear radar isn’t working.
That last scene. Needs her to pop out and stop the depression.

Good job on the upload!
Lol didn’t notice the initial flow of the pages until I reached the “last” page wondering what happened?
Of course after refreshing, everything was good.

Kurokawa will get her “princess moment” and I predict that she will give that up and reaffirm her resolve to Stan for Fujishiro.
As for Fujishiro, I just hope she finds a way to positively change Kurokawa from being a Stan to being a real friend, plus or minus a make a yuri ship with Kurokawa as bonus.

It’s interesting how my perspective on this story changed after I started reading more web novels starting with “I Favor the Villainess” or like “Bakarina” around October 2019 vs the start of this manga in 2018.

Kurokawa is like the “normal peon girl” who on one hand wishes to be a princess but obviously fangirl stans the story princess and even the “villainess noble girls”.
Fujishiro is like the “villainess noble girl” but she suddenly gains awareness when she realizes that Kurokawa is not as “ugly and flat” as Kurokawa appears.
Miku is your typical lackey fangirl that hates Kurokawa for breathing the same air as Fujishiro and even “breaking” the pecking order.
Izumi is your typical useless lesbian prince that more or less has a different relationship outcome thanks to Kurokawa’s “involvement”.
Yo-Chan and “the girls” are your typical otaku girl group that doesn’t realize Kurokawa is also an extreme “villainess noble girls” stan.
Iroha is like Yo-Chan except she helps show more perspectives of Kurokawa’s stan-ing. She also gets to pursue the useless lesbian prince thanks to Kurokawa’s involvement.

More or less, we knew that Fushijishiro was going to realize she was going to be alone and feeling depressingly lonely from hanging out with her initial group of friends who kept their distance. Fujishiro just happens to realize this now rather than in another 10-20 years thanks to Kurokawa’s falling out of the closet.

Now we will see how Fujishiro’s awareness changes as we now have a guy approaching Kurokawa Vs when the guy left Fujishiro.

Kurokawa really should try to clear up the misunderstanding that Fujishiro has. Fujishiro really will get in a lonely corner by herself.
I guess maybe Kurokawa’s secret desire (to be a princess like Fujishiro or more equal) might be why Kurokawa hasn’t cleared up anything. Or is it that Kurokawa knows how bad of a stan she is that she knows that clearing up the misunderstanding means showing your princess how “ugly” you are inside. Well a mixture of both probably takes the cake for why Kurokawa is also a useless protagonist princess.

It seems like Kuro really kept that “I’m not equal” vibe the entire time. Like Kuro is Fujishiro’s stan.
So Fujishiro is the only one to do most of the emotional moving since the beginning. Feels like she’ll stress herself out from having to try to get closer to one of her “stans”. And Kuro tries to prevent her princess from burning out, but doesn’t realize her stan mentality is what causes the stress.

They’ll need lots of going back and forth with this issue. I want the ship to sail but it’s going to need lots of mental therapy and confidence building to go anywhere.

Baiser is awesome! Yuri shipping for the win!

Minami-Sensei clearly needs to do something for poor Morinaga-Chan. Make a ship that ships ships.

Though if they used sepia filter to emphasize a flash back scene... that would make more sense to me. 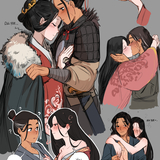 Wish these Chinese web novels had more illustrations. Hard for me to keep reading 100+ chapters each story without eventually skimming for NSFW scenes. And Chinese NSFW chapters usually get censored off their official site. 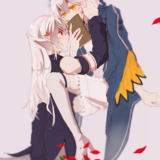 I only know Warfarin as a blood thinner prescription drug. Any correlation to this Warfarin in Arknights?

Got the awesome vibes here! Love getting this satisfaction feel from reading stories like this!

But there are a lot of stories that just pull you through mental torture for another 100+ chapters making you wonder why you didn’t nope out sooner.

“Watch these miserable high school girls frolic about in their miserable school life.”

Is the author serious? Does that mean these two poor girls are not getting together in the end?????

Lol it felt too shitty when the glasses girl sent out the blackmail.
So I just hop right to the comments to see if this is ending any time soon or not.
Good luck on dealing with another volume or two of this. Apparently some mental masochist likes to keep these kind of things published.

Sorry boy, but the image of your idol is literally a dream girl. You’re gonna be in for a shock and mentally rejecting the truth. Cue in manga where girl has to compete with her magazine self just cause boy is too blinded by all the photo shopping.
Btw I don’t remember reading the ending of that manga because who wants to wait for the ending of probably a long drawn out rom com?

https://youtu.be/mcOuUX165VI
So is Pyxis doing a reading voice over or even better than that?

Itou Miku with another work yes!!!!
Will be interesting to see how Moe Toyota voices Watanabe. Hearing a gloomy version of Moe’s voice is going to be a huge contrast to all the fuee’s I know from Kanon from Bang Dream! Hello Happy World!

Is there a group already translating the light novel? I can download the raws, but idk how to translate them.

Probably the amount of makeup and hair do over helped change her impression on top of the different persona.