Wait, are finger condoms a thing? I heard of them but i never see them in any doujin or mentioned.

lol when you and your crush unwittingly friendzone each other

sayuri101
A Story About Two JK Getting Along discussion 22 Jul 21:10
Quote

Child-at-heart and actual child: A story about 5 to 25 years in prison

Ah I see. It's a reversal because her butt was talking and not her face.

this gave me quite an uwu

also art is on point

sayuri101
I Suspect My Childhood Friend to be a Lesbian ch01 discussion 23 Mar 22:22
Quote

"kind of" a lesbian too

I loved it so much. I'm so happy that our genre is taking off. There's more yuri in the summer season also! 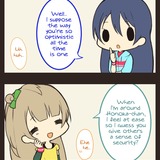 I assume a rape scene ensues after the last panel.

The last page is totally not a euphemism xD

I died on the inside reading this </3

Are you talking about "A Lollipop or a Bullet"??

Wait, that girl dies at the end?? Oo

Yass!! Thank you good ser! <3
Just the manga I needed to depress my friends!

Does anybody remember reading a manga about a girl that limps and thinks she's a mermaid? She had marks on her skin and says its cause of pollution, but in reality she's being abused by her stepfather. At one point her dog disappeared and is found dead on a mountain. She is also found dead on the same mountain near the end.

Please and Thank you.

omg... i love how this more than slightly relates to me and my senpai.

Amano Shuninta ... What the fuck am I reading?
Seriously, what's goings on here!?

I'm not quite sure what happened but I liked it. :D
Thank the gods for Amano-sensei.

Makes you wonder if maybe the artist hasn't really read any yuri released since the 70's.

Ah well. I really like Chako, that's about all there is to it. If you finish chapter 8 in a rage-induced state, at least give the Omake a chance.

"Disappoint" should seriously be a tag. 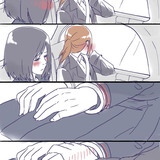 Well, from what I've learned from Japanese class. The Japanese culture heavily emphasizes on subtlety when it comes to things like love. In Japan, one doesn't say "Aishiteru" or "I love you" to express fondness for other people, they say "Suki" or "I like you" even for people they've known their whole life. It's like being told "I love you. Will you marry me and have my babies?" from someone you've just met on the street. It's just plain creepy. In short, the Japanese don't say it, they feel it, which is exactly what Miman might've been going for.

loud disgruntled sigh Matsuri really needs to be put on a bus.