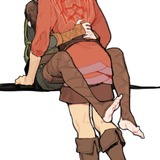 I don’t know why but I feel like Ami might end up with Ran when all is said and done. I feel like they will end up getting very close while confiding in one another about their experiences with their crushes. I’m excited to see how it all pans out.

Wait, so Ami-chan's Diary is set in the same universe as this?

I think so, since Kotoko knows a character from Ami-Chan’s Diary. But maybe The Girls Arcadia takes place in a later timeline since all the character’s shown (and maybe have yet to appear like Aoi) are in high school and Kotoko is already in college. Or maybe this Aoi character is just older than the main character’s in Ami-Chan’s Diary… Either way it’s interesting and shared universes are always a plus.

The main story I love you so much, I hate you is available on Amazon (in digital and physical form) for anyone interested in the events prior to this sequel. It’s really good and definitely recommended.

It seems to be moving fast in how close they got. Its like weeks or a month passess between each chapter rather than a few days? Thats what it feels like to me- like im missing half their story of how they became close.

If it is skipping multiple weeks I wish it would tell you so i had a better sense of time passing.

I did some backtracking and found that it’s been over a month based on the first sentence on this page:

I’m pretty sure Zhang is actually gay but might be going along with marriage because of family/society. Dai Yi’s gaydar is definitely not broken. It’s also nice to see the main character be out of the closet from the start. It’s been been bumpy for her but maybe she can help Zhang feel more comfortable about herself later. I guess I’ll have to wait and see how it plays out. waits patiently

The beginning was an entertaining introduction but that stare by Miss Zhang on the last page did it for me. It’s both frightening and hilarious. I can’t wait to see where this goes.

Saine seems interesting. I can’t tell if it’s in a good or bad way however lol.

What I wanna know is what she actually was doing to that dude, why’d she wanna beat him up? Also does she have a child? Is that what the ending was about?

The author’s child is YouYou, the little girl who left school and is with the redhead Vlogger in the restaurant. As for the rival author guy, I can only assume her beef with him has something to do with some underhanded tactics being used. She said she was teaching him a lesson so maybe he purposely provoked her. He’s probably the one who helped “leak” those photos of the argument. Her manager even says she was probably set up. They’ll probably explain it all later on.

It's basically turning women into quite litteral ''objects'' and there's just no way to rationalize it in my book, especially as a woman. Different cultures and all aside, this is an objectively wrong practice.

Yeah, there's a reason they're called "idols". And idol is not a "filthy" real woman, she's your "pure" dream girl, someone you can fantasize about, but never reach. But that's OK, no one else can either - and a relationship would shatter that dream. It's selling a certain image, a fantasy, and nothing is allowed to interfere with that.

Really not my thing either...

I'm curious, does the same thing happen with male idols?

It does. Male Idols also have to hide their personal relationships and appear eternally single as well. This happens not only with Japanese Idols but Korean K Pop Idols as well. I’ve even seen male K Pop Idols actually offer up a public apology when female fans discover they’re dating someone or are getting married. Often the relationship is then announced to have ended shortly after discovery because of fan outrage. There’s objectification and unreasonable expectations on both sides of the coin.