I don't know Ruriko is sexually attracted in Kurumi but she's definitely definitely attracted to her. Same vice versa as well. That's my 5head observation take on it, thanks for coming to my ted talk. But no really, some how I am more interested in Kurumi's feelings towards Ruriko, I think because it's a growing instance, in how she's coming to a slow subconscious?¿ realisation of how she feels. Ruriko's seems more suppressed and I don't think she's gonna come out from her shell before Kurumi. I think Kurumi's development will be the catalyst maybe, or at least that's what seems to be happening here. Rio will probably get hers before our two protags though. XD

Okay so having read this I can say, it was at least pretty okay. Nothing too grand but it was a competent piece and even if only ever so slightly, thought provoking. It's a very 7 out of 10 piece and I feel like I am being kind there. The ending (9-11) just kinda happend and I feel like we could have gotten more ta the point where she realises that she was just fooling around and them wanting different things. It was kinda handled as maturely and competently as I could expect at this point so still, I will say it's a decent read, the opening chapter looked like it was building up to something with more grit to it but perhaps that's my fault for jumping the horse, yeah, still okay though.

I am a touch disappointed by some of the comments here, the hatred towards the author feels ill mannered to me. Like this obviously isn't for everyone and that's fine but I don't think fictional mediums that feature things you don't like should result in this, idk.

I have just picked this up and it feels like a well written train wreck. It's looking like a what a scums wish should have been. Not my thing either way but as train wrecks happen, I can never seem to look away.

I can always respect and author that's willing to do justice to this kinda story.

Ritsu is just sloppy seconds for that Senpai. I can't pretend to say I care about any of these relationships right about now but Kyouko actually loves her for her and not because she fits some bill of an ideal she once saw fancy in. This senpai will meet many like Ritsu and fall in love with them just the same. Kyouko and Ritsu will only have eachother once.
Shame, I kinda had some respect for Makoto until now, that was either a lapse in judgement or poor form.
It's kinda on Ritsu what happens from here, her actions going forward stand to vindicate her girlfriend or strengthen their relationship. Time will of course tell.

Man I have been reading all kinds of horror, gore, violence and smut recently. If I see a manga about assassins and murder I am reading it lol.

Obligatory, "not a furry" but that was refreshing to read, I am excited to read more. I hope. It looks really good.

Get well soon Sensei, this was an absolute banger and a pleasure to read.

Aight, I am interested but the upload schedule on this is crazy patchy. Looks like another case of Citrus or something in that vain, which I am not craving but everything has been presented well enough and the art is good so I am game.

It says dropped but a new chapter was just added, I don't get it.

I enjoyed this tbh, I hope to see more from this author.

Okay well that's gotta be the record for longest Yuri manga title ever yes.. I mean just look the sheer heft of it.

Someone who has finished reading the manga. Spoil it for me. I wanna follow but I don't wanna waste my time if the story fails to deliver. I don't particularly care if it goes yuri, poly or het, as long as it doesn't become comedically ridiculous doing so.
Save for the typical angst I can't get a read on how the story intends to go about things.

I wonder if we'll get more from this author. I mean I really enjoyed this. Yuri aside, I was fully into the world building with all the different clans and stuff yk, it was a real gem to read.

Normally I am into NTR but I don't care for harems unless it's comedy. The last episode did kinda kill the immersion for me but I guess that was my fault for expecting something else lol.

I like this. I like that it's not the typical school setting for once. I also like that it just got straight to the point. This will be good switch your brain off read for a bit.

Reading that was kinda depressing. I liked it. It was melancholic af.
Also the ending was interested. Almost like the kouhai, in a moment of weakness reverts back to her old self after seeing her Senpai's feelings but then she said that, this time she would be the one leading senpai on, but then she said that Senpai, should love only her, in a series of small twists and turns. Perhaps I should pay more attention to their eyes, as the saying goes, the eyes reveal intentions?¿?

I am gonna save this til the end of the volume and binge it. It looks interesting. 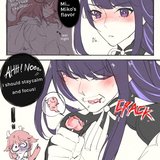 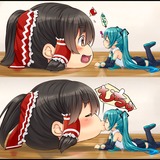 I can relate to the part where she comes back and asks if she took too long and apologised. Like you just lose your sense of time sometimes you know, like the moment just isn't there.

The vibe of this was still kinda weird but honestly, if I was that low and alone, I wouldn't mind meeting someone cheeky like that. Even if I wasn't in the mood for anything. As long as I wasn't taken advantage of, honestly, anything would do.

Dynasty Reader
The Gradual Changes In The Room Of a Lousy Neet Who Fell In Love For The First Time discussion 15 Aug 15:28
Quote
270 posts
joined Sep 7, 2021

They say a picture tells a thousand words. So I guess this told many thousands. I liked this, it was a bit coming of age, I am happy for them.

Her failure was being unable to respond to/fulfil that child's wishes maybe?

Dynasty Reader
A Yuri Story About a Girl Who Insists "It's Impossible for Two Girls to Get Together" Completely Falling Within 100 Days discussion 29 Jul 16:54
Quote
270 posts
joined Sep 7, 2021

I mean so haha, that's like totally the big bad R, the rotten sexual assault right? She was saying no or trying to and Aya just steamrolled her anyway..
Of course I could well be 100% missing something here but idk.. Any thoughts? 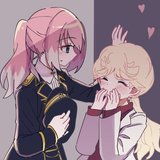