Damn I knew we'd get the backstory soon but I didn't expected it to be right next chapter!
Still, the guilt is something that might never go away, it wasn't her fault, she had no idea of what those visions mean, sad that she figured it out the worst way possible

I think that this might be one of the most important panels for Satsuki's character so far, many people nowadays seem to lack empathy with others and because of that characters like her seem very difficult to be made nowadays, I think that realistic characters who are humanized and can fail are a lot more relatable than an edgy protagonist who is bloodthirsty and seeks revenge

All the President's victims so far were nothing more than people with issues that needed to be dealt with and could have a chance to change, Miho being the greatest proof of this, a slightly cruel bully who was saved by Satsuki and managed to change and become her friend

This was a very sweet Satsuki and Akira moment, great chapter overall

Satsuki is just not well anymore...but I'm glad to see Akira back with her again, hopefully she can make Satsuki feel a bit better

Can someone please tell me what's the color of Satsuki's eyes? on some art it's red and on other art it's green

I think the actions of these two will eventually lead to one of them dying so that the other finally has a reality check, If this plot gets to a point where they both walk away unharmed with nothing serious happening to them after everything they did, it's going to be insanely unsatisfying

I really hope we're not facing a case of "writers' darlings" here, lol Go ahead, enter the gay tent Oh Sumire is a Libra like me!...this actually explains a lot... I love this ship a lot already...they are really playing with our feelings aren't they?, could this be it? could Love Live finally enter the Yuri world with these two?

A character's moral code can be broken when the antagonist keeps pushing the protagonist too much, Prez's masterplan succeeds and Satsuki not gonna stand there and rant about how awful Prez is, let's not forget Akira's dad, one way or another Satsuki has to break her code due to Akira's dad possibly lead the worst circumstances to Akira and her mother.

And 50+ chapters with that moral code sounds pretty long, it's time for that spicy drama you know.

Honestly I don't think that Satsuki's moral code will break, giving the fact that we didn't fully explored her backstory and why she has that moral code yet, currently I could see the opposite happening with President's moral code being broken
I could see her pulling a move similar to what Superman did on "Superman VS The Elite" where he pretended to break his moral code and going berserk to scare off and deconstruct the antagonist that was trying to break him

I think Satsuki is going to do something to scare and deconstruct the president, make him feel like the victim this time, maybe with his corpse or the girl who's always with him (I forgot her name) showing up and he can't figure out the cause of death and getting desperate when Satsuki refuses to help him find the cause, with her pretending that she finally bought what he has been selling, I bet the president would break if that happened to someone he cares about like his partner

Hmm not sure if she is really dead, I don't think the author would throw an unresolved point of her thinking that it was Seo who sabotaged her plan and then just end her like that

I can't see the yuri in here tho... do we get more yuri in this manga later on?

I guess the author is kinda going into that way with Satsuki and Akira, idk, when Satsuki thought that she was about to die everything she could think of is about Akira and how she wanted to spend all her life with her, sounds pretty gay to me lol

Why did Satsuki and Akira stopped hanging out? did I missed something?

Anyway, I feel like this prez arc is close to a end, either next chapter or after the next one I wish this ship had more art

sure his method is merciless, but why let the Bully bully more people, it's like talking to serial killer and send them to jail for 5 years and releases him, guess what? Serial killer kills more people and this time it's hard to catch him, what a perfect world.
Why am I comparing Bully with Serial Killer? Both lacking care of others, they just do it for their enjoyment, they don't care about other.

What is this? Injustice: Gods Among Us? lmao 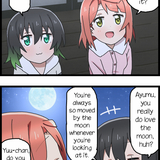 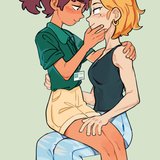 Adult Sasha is just too beautiful

That's exactly it! thanks a lot!

After that I can't remember much, because it has been some years since I first read it, if anyone knows the name I would be very grateful!