Gotta admit... that is not quite the twist I was expecting. Though in hindsight, it is in keeping with the theme and goals Stigma has been pushing.

Kiana
Who Decided That Blues Had To Be Cool!? discussion 29 Nov 09:43
Quote

Minor thing, but I keep seeing "cos" instead of "'cause" in translations lately. It bugs me a bit more than it probably should...

tl;dr: MadoHomu is canon and you can't convince me otherwise.

And Rebellion ended five minutes before the credits. 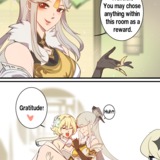 Literally all I know about Genshin Impact are ships. They're pretty good. 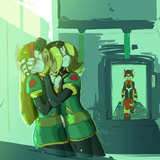 Well this is a blast from the past.

Being an Antinoid lets you blow shit up with your lesbian gf, get validation regardless of whether you're a nerd, a weeb or a shipper, and also allows you to have daughters with said girlfriends.

Fact that an attempted rape scene is played off as a bit of a joke in the extra is quite... yeah...

Bad enough to have the sudden tone shift of sexual assault, but https://dynasty-scans.com/chapters/tadokoro_san_ch62_5#3 is a 100% deal breaker for me.

I've been enjoying the read, but after that... dropped.

Damn those onions, jumping out of nowhere.

Page 4 and I already knew it was going to be a "mistook sibling outing for cheating" chapter. Why is that a trope? 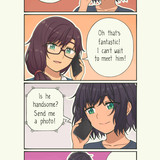 Pas is a blessing. ♥

And here we see Stigma causing his "villain has a point" score to rapidly plummet.

Conjures a gun, really, but the girl did always seem like a rather pragmatic sort owo

I suppose her actual power is more like matter creation, considering the giant syringe. And being able to spontaneously generate medical supplies would be an amazing power to have, in terms of life saving potential.

But 'has gun' just seemed like a more amusing way to phrase it. :p

This chapter... is the best chapter. The boys get their cute-but-belligerent moment. Prayer continues to channel the readers. Pilse reveals her superpower is literally "has gun." Non-stop entertainment.

So many great blushing faces~ ♥ 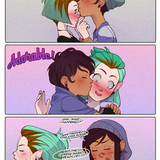 Kisses on the forehead are just... the cutest darn thing. I don't know why, but I love them so much.

"Everything I've done has been for you!"
Ah, yes, that old lie. At least she seems willing to change...

And Yuuna's really grown on me over the course of the arc. At the start, I was so sure I was going to hate her. But she grew, too.

I'm actually thinking Hino is too feverish to remember anything XD

And asks for a repeat to jog her memory. Repeatedly, if need be.

My father screamed at me like that. The slightest attempt at so much as explaining a situation would be met by the supposed adult throwing a screaming tantrum.

Yuuna's mom is rapidly rising on the list of people I want to set on fire.

Nooooo, Prayer has turned my love of shipping against me! How devious!

...But it's not my preferred ship, so you're gonna try harder than that! Iko x Shy shall conquer all.

I'm still looking forward to the inevitable wedding... In 2036, so at least I have a reason to try staying alive.

That is a surprising lack of blood for what seems to be a pretty deep chest wound.

I would so watch this if this became an anime. And yes, let's emphasize on decent budget. I was psyched to see Citrus got an anime adaptation but I honestly thought it looked terrible.

It's not just about looks, but also about getting talented VAs, direction, storyboarding, editing... Talent doesn't come cheap, unless you luck out and get a cast of rising stars early in their careers, and that's a gamble with long odds.

Not getting an anime adaption would hurt less than getting a really poorly made one that isn't enjoyable to watch, and that never gets more than one season.

Poor Kfufu. She needs a hug. And love. And support. And a lot of therapy... but she's a good kid, deep down. Which seems to be the underlying theme with the antagonists.

Someone please greenlight an anime adaption. With a decent budget. Please. 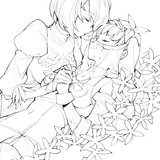 The last two chapters make me feel like I've just been punched in my soul... Bringing up a lot of painful memories.