Nurse position, it's being a while since i see this one

Alphabus
A Yuri Story About a Girl Who Insists "It's Impossible for Two Girls to Get Together" Completely Falling Within 100 Days discussion 16 Feb 15:22
Quote 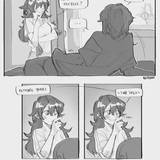 Ok i love dad jokes but i don't understand this

How much weed you need to smoke to think in a plot like this one?

This is like a dream come true, JALTER IS CUTE Alphabus
The "Villainess's" Engagement Annulment, Or An Account of the "Dark Saintess" ~another story~ discussion 27 Jan 19:28
Quote

If this was a oneshot that might develop into a full series, it would be excellent, but as a self-contained entry in an anthology, it feels rather lacking. The political manoeuvring was interesting by otome villainess story standards (although that is an extremely low bar), but I felt zero emotional connect to anyone involved. It feels like a classic example of telling over showing- we're told that there's a good relationship between the two leads and shown a panel of them with lilies in the background, and we're told that the duchess plays the part of a villain while a montage runs in the background, but nothing ever seems to happen in real time apart from dreary exposition dumps about the politics of a place we know basically nothing about. I'd get it if it was your standard chapter one infodump that gives readers context so that the rest of the story can flow, but as a complete story in itself, it just feels like a chore to read, a promise for what might be a compelling tale delivered by a dispassionate voiceover. All in all, it suffers from the exact same problem that every other story in this anthology has- a desire to stuff a complex narrative into forty pages by prioritizing generic otome political babble over any actual emotional depth. This doesn't feel like an anthology of tales so much as a compilation of recap episodes for series that never actually existed. 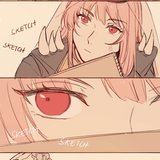 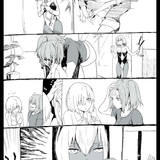 Lol, that sempai got a friend w benefits nor a gf in secret This deserves a whole manga series Ideas of how they coupling up? AHHHHHH the well comunication of marriage