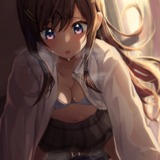 As for the "glasses": in the story, it's spelled out that Kurokawa's in love with Fujishiro as well but yeah as pointed out by others already it's riddled with inferiority complex.

Kurokawa seems to double down on driving home the point to Fujishiro by re-gaining her old mark. She is what she is: lightyears away from the hot stuff. Can't blame her though for feeling that way. When you've set yourself up as a nobody and you're relentlessly bullied i.e "you will never become a princess", being friends with THE princess is an actual miracle. And miracles, normally, are seen as "undeserved". You'd rather love your muse from afar.

Good luck, Fujishiro. She's gotta be the decisive one cuz sure as hell Kurokawa's friggin stubborn here. I just hope she reads between the lines and see Kurokawa's also in love with her. 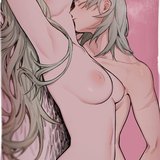 I wasn't expecting any WEP pairing to be here honestly. But this isn't bad at all. Go for it Ayaka. Go get your girl.

ClaudeSP89
The Two of Them Are Pretty Much Like This discussion 22 Feb 23:31
Quote

Sigh.
Sakuma, Wanko's in a way a kind of entertainer too, right? Don't be pissed off by that. ;) I don't mind the "third wheel".

This part is looking fun. Can't wait for the next chapter.

Any news of the whole stuff to be uploaded here?

Mixed feelings about this. Waaay earlier discussions about "Kaoru snaps gay" seems to have come to fruition. Would you look at that.

I can't blame Kaoru for feeling loving carnal desire towards Uta.
Uta has grown up to be a fine-looking and loaded lesbian. I love how the girl with dark bunny ears presses her hand on the waist of the other girl whose pussy she eats.

This series have been really frustrating to read at times, but goddamn if i didn't grinned like a moron when that moment finally happened. I guess i just love cheesy dramatic kisses.

The chorus to Louis Armstrong's "What a Wonderful World" came to my mind when I saw the moment they kissed. Useless lesbians no more, it seems.
Cheesy, but kissing under a shared umbrella under the rain is a romance cliche that deserves cheesiness. (Nevermind that Armstrong's song was an anti-race riot anthem)

BUT WAIT! The two basic bitches behind them definitely saw them didn't they?

Hopefully, they did. I want to see the drama that follows the kiss.

Having sex does not make you an adult. At times I get very angry when such lies are spread. Only maturity makes you an adult.

Oh... I thought only adultery made you an adult...

Oh, it's Battan. I'm in. I think Battan is a gifted story-teller and artist.

I like the way they utilize the kid's pov well as the vehicle for readers to gauge the situation i.e the intensity of Kyouko's gaze into Kanda's face. It doesn't take a scientist to figure out Kanda's experiencing jealousy for the first time. LOL her sulking is cute.

I can't wait for how this all plays out especially the age gap angle. For sure, this one is gonna be super angsty like Run Away with Me, Girl. 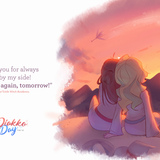 It's about the physical volume, the tankoubon.

Most probably, in the tank, there'll be extras and maybe side stories.

Thanks for that one. I was confused and didn't realize right away that it's the tankoubon.

What's that Volume 2?
Anyhow, I love how this all wraps up.

I'm just gonna re-read Canno's other work: the one stuffed with many hot girl characters.