Idrc about what other ppl say about this. I'm in for the toxic-incest relationship. Idk, I've always been into yuris that would make me feel something really dark and wanted to know how the characters will justify their actions (tho obviously I'm twisted as well, BUT, I don't do this shit with my partner) just wanna feel something and all so I'm really curious on how this will turn out. Also, I'm kinda annoyed with that one reddit forum whereas fujoshis talked abt that omegaverse yuri manhwa and how it disgusts them. Like hello?? If it's yaoi, it's hot and sexy?? But if it's yuri with omegaverse it's gross?? Toxic yaoi fans sometimes get on my nerves so I'm trying to cleanse my mind with ppl who has positive views in this kind of genre

Lol! I love Yuri. I can not say that enough. Unfortunately, I can't/haven't shared that with anyone I know. If it's yuri, I will like it unless the plot is just disturbing or terrible and I can't do yaoi. I have read some but overall it's not my cup of tea and I will never completely understand how yaoi got so big.

Some people are saying the pages aren't in order, and maybe that's why I'm confused, but I'm confused.

What incident were they talking about where she was going to tell the parents but then she didn't tell the parents? Was it when she got raped by her younger sister on the piano after coming home and smelling her pherarmones? Basically that whole talk in bed after she gets fucked by her cousin is confusing...

Last page also says about the younger sister: "Determined to be in Omega and possesses most omega traits" or something close to that. I thought she was determined to be an alpha? Or has she accepted being an Omega completely at this point?

"Determined to be in Omega and possesses most omega traits" meaning it was determined that she was an omega and possesses most omega traits (not all) probably refers to her heat cycles, her smell as an omega, etc. She would have preferred to be an alpha simply because it would have been more convenient and she wouldn't be held down by anyone. Don't worry, that line got me confused too but only for a bit.

Solaris1
The Results of My Author/Classmate Discovering My Yuri Obsession discussion 27 Apr 23:12
Quote

I hate these 4-komas! Also pulling my heart strings with 1-2 page(s)!

Solaris1
That Time I Was Blackmailed By the Class's Green Tea Bitch discussion 27 Apr 08:37
Quote

you know it kinda annoys me how the mc thinks that she will fall in love with her if she stays by her side like ??? you can have friends without catching feelings,just because you are attracted to girls doesn't mean you are attracted to ALL girls but well this is a manhua,i want you to catch feelings

She has a gay friend and neither of them have shown any attraction to each other, so it's not a matter of being unable to be frinds with girls. Lin Luxi thinks she'll fall in love with Tong Tong if they stay friends because she already is catching feelings.

Yes. ^ is correct because in the beginning she didn't distance herself from tongtong but after being "blackmailed" by her, Mc realized that not only was tongtong very pretty but she was also very nice, innocent, and gullible. Once tongtong started praising her (ex. ch3) mc would blush so maybe (or not maybe) mc knew that she was catching feelings.

Solaris1
That Time I Was Blackmailed By the Class's Green Tea Bitch discussion 27 Apr 08:18
Quote

No! Give me the weekend!

Solaris1
The Results of My Author/Classmate Discovering My Yuri Obsession discussion 26 Apr 01:15
Quote

"I don't like 'em putting books in the libraries that turn the freakin' girls gay!"

It doesn't turn girls gay. The girls were already gay to begin with

Solaris1
The Results of My Author/Classmate Discovering My Yuri Obsession discussion 26 Apr 00:27
Quote

Not a plot twist: All the girls ARE dating another girl and the protagonist is NOT delusional.

Chapter 19 is so funny. My baby is sleeping on my belly and I laughed a little too hard for him. Oops

Solaris1
She's Not What I Expected discussion 23 Apr 08:13
Quote

That's not a happy ending in my book! Give me more!

Nooo! You can't say that! You gotta be honest! Especially when it comes to yuri

I love how Yurizono Mamoru has a lily flower in her hair and lets not mention her name. I pray her whole family is secretly like that (because they hide it from each other)simply because of the name. I also love Tonsho Ritsu for her Common sense and quick actions.

Lovable. I love it. It's great. I'm surprised it's not age gap or loli.

How did I just finally come across this!? The story is very well written so far in my opinion.

I shouldn't have read this before going to bed.

Good thing I read it after waking up

Solaris1
At That Place Where You Can See the Ocean discussion 24 Mar 16:03
Quote

quickly saves it into my Favorites 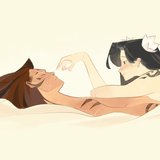 What? Why? There was no sexual tension of any kind between them in the movie(s). I'm sliding this into my favorites as I say this 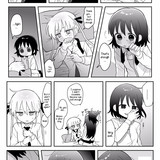 Author claims no responsibility. What a shame, they could've claimed a lot of hands. 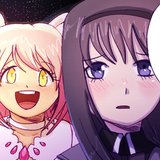 Is God telling me something?

How did they lewdness of holding hands happen?? I would like a more in depth explanation

Ugh. They should just date already!!! Gay or not!!

Wait. Does this mean that Yuzu actually took Mei's ring by accident? Causing Mei to -- gasp HOW COULD SHE. But all is well that ends well I guess 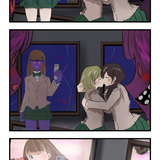 ^^^^^ No. Definitely swayed by the yuri. They just gotta hold hands. LOTS OF IT. 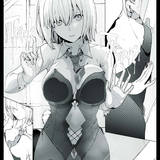 "Thick or treat" is what I see