Doctor_Hoot
A Yuri Story About a Girl Who Insists "It's Impossible for Two Girls to Get Together" Completely Falling Within 100 Days discussion 31 Jan 19:12
Quote

It's so frustrating that compensated dating as a minor is correctly identified as dangerous for Aya, but the fact that she was sexually exploited by the bar owner is not treated as a serious concern. It's giving "woah the sexual predator is a woman? Awooga! I wish that was me!" The bar's patrons don't care, and while Marika does call it illegal, it's still obviously played as a joke. In fact, she later blames Aya for putting herself in that situation.

Clearly, for two girls in love, there is no environment more romantic than the bar owned by a woman that groomed one of the two girls (and a third girl). What place could be more relaxing and safe than that?

The real kicker is that it's not very common for the wider wlw community to be explored in yuri manga, and this one just tosses in a grooming subplot that takes place in a lesbian bar, and treats it so lightly.

I love this... It was just one chapter, but there's already so much to think about. The artwork is so pretty.

Hanayo, a shy and reserved woman, and Yoshiko, a charismatic lady, depicted as a creature of the night. I know their names are probably not a Love Live reference, but still... 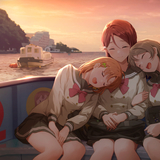 Riko must be in heaven

It's nice to see so many SuleMio works getting uploaded

The future is determined by the now. Tomorrow is in love with today. This, too, is yuri.

I'm really happy for them

The Massage tag kind of spoils the joke

Doctor_Hoot
The Skirt Sings at the Landing discussion 29 Jan 16:26
Quote

The chapter felt kind of clumsy, but I do like that the balance shifted a little. I like that Michiru tried to run away, but then stopped a second later. I feel like the same thing has happened before.

Miyoshi isn't merely sus, like she isn't even hiding that she's into Ayano. Rather it's like she's trying to see how far she can go until someone finally calls her out

Really cute! I love the idea of kisses as good luck charms or motivation. The reversal was also nice, and the way Saki managed to soothe Kei's anxiety.

Finally, it's time for some nefarious yuri

Doctor_Hoot
Does It Count if Your First Time Is With an Android? discussion 20 Jan 10:32
Quote

if I were Jun I'd just say "Freeze all motor functions. Analysis: are you a sex robot?" but I guess I'm just different

I'm so happy for them! Excellent location for a fist kiss too. Not sure why, but the way water and land meets on a sandy beach is a really nice metaphor for a kiss...

I admittedly rushed the translation, so it's more likely my fault. I'll revise the page when I get a chance.

Thank you for the translation!

Just one note: not sure if you noticed, but Maki became Mai on page 6

I wonder if Diana has a last name. The duel in chapter 2 was announced as "Diana vs Tenebrae", and in chapter 3 the teacher addressed them as Diana and Lady Tenebrae. What's up with that?

Everyone in this manga obsessing over Hanaoka's boobs all the time is starting to get pretty uncomfortable. I've never understood this type of humor

Yeah, the vibes are off. It's not just a one-off joke here, but more like a running gag. Women with large breasts do get stared at in real life, but I don't know why I'm supposed to find it funny.

It doesn't help that the humor in general consists of "tall girl has big boobs, small girl is otaku". I figured it would still be worth reading for the romance, but Ruru and Shiorin are almost never alone and they always get interrupted, so...

Good for them. Not only did Kyouko finally initiate the kiss, but she did it while straddling Miku in bed...

Never mind, the settings on my profile were changed. I don't remember doing this, so maybe I changed it by accident, but at least now I know. Sorry about this!

In case anyone else needs a reminder: 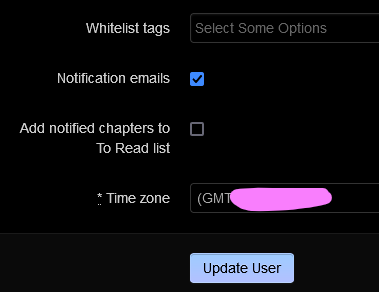 That said, I think Diana is unlikely to succeed with Natori, simply because "villainess" is in the title, and she is not

I haven't been receiving chapters from my subscribed series to my To Read list, even though I started to receive email alerts for the same. I was wondering if I'm the only one experiencing this issue, or if this is an intentional update and I'm just out of the loop...

Said it before, but will say it again: Miorine's hairstyle from the back looks like a penis.

It looks more like a mushroom or jellyfish to me

this is just terrifying tbh

what would have happened if she hadn't remembered it on time?

Hopefully their relationship would get divided into two slices

Is it just me, or wishing for a couple to split up, regardless if they have "toxic" relationship (in your PoV), in which BOTH of them doesn't mind and still love each other nonetheless, kinda weird, I still find it hilarious how people say "She/He deserve better" when the people in question wanted it in the first place, who are you to decide what's "better" for them? That's more toxic in my opinion.

me when I read Kitanai Kimi ga Ichiban Kawaii 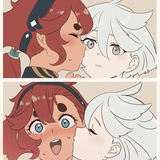