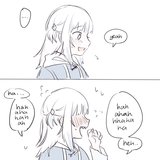 I would've said something about Ina being tragically alone, but then there's her flirting with Yozora Mel in their recent collab when the latter asked for her type and Ina literally described Mel before answering "yes" when said banpire asked if she's talking about her.

The "fiction doesn't affect reality" "debate" has been so poisoned by jack thompson satanic panic crap from the 80's and 90's. we know quite obviously fiction doesn't make you literally recreate whatever happens therein, but that doesn't mean there's 0 impact. If there was why the heck would anyone do literary analysis on anything (or for that matter write/make anything)?

The fiction people make is informed by their real experiences, biases, tastes, beliefs, etc. in which they present in some form, and the reader attempts to matches their own, to relate. Whether that's merely finding a subject entertaining, which is informed by those kinds of things, or aligning with those biases, tastes, beliefs etc. explicitly, it's still reflective of what is acceptable/agreeable etc., particularly if its meant to titillate or agitate (such as propaganda). When you sexualize minors in fiction (which hasn't happened in this manga, yet), or romanticize relationships between minors and adults, it is imparting a judgement, it is indulging if such judgement is "it's taboo". Just start asking why. Why does the author make it? (real world consequences?) Why do people read it? Why does it entertain? Why would someone want to read a chapter titled, "enjoying the scent of high school girls", a sentence that if said in public might have police sent your way by most people? Indulging in a "taboo" is disagreeing with how that thing is perceived by people and that can be as much as "just portraying it". I get it, high school is nostalgic for memories and first romances, immaturity can be funny, fucked up shit happens to kids, there's plenty of reasons to write about those kinds of things in regards to kids. They appeal to frustrated/sad/busy adults, and maybe can make things better for future kids, show how bad things are, or whatever purpose you ascribe. As soon as that delves into sexual stuff, those aims or designs are betrayed. An autobiography doesn't need to go into explicit narrative detail about teen sex, you'd be concerned for that person's health / be grossed out.

This story is pretty clearly dealing with late bloom sexual awakening of its protag via explicit sexual cues and how that affects your potential first relationships. For a minor to be introduced as a parallel, does not bode well. However, it seems she is more ingratiated because of Nakano's charm and the flirty atmosphere, which is a much safer route (i forget if she ever heard any of the main people or if she just had the complaint brought). It could be a "look what nakano missed out on coming to terms with her sexuality by not ever being around gay people at that age, how would she have been emotionally/personality wise?" deal. That tract can reasonably be entertained with no need to be sexual, depending on the person that can play such a small role in the way their attraction works, so why not play safe? why go there and invade, encroach on indulgence? If it's really such a hard idea to get, ask yourself if you'd want your own sexual awakening portrayed in a fictionalized film in explicit detail, done so by pure coincidence. It'd be embarrassing, disturbing, and extremely uncomfortable, even though it's a fictional character, to you and the audience. It's a topic better suited for subtlety. When this stuff happens in western media, like Big Mouth or Sex Education, it definitely gets more obvious when the actors, whose job it is to convince you they are a teenager or are actually teenagers down to every detail, play these things out. What is getting encouraged, what is being particularly enjoyed? Who is making it, who is it for?

Every little bit contributes to the very real and prevalent problem of pedophilia, and a lot of manga plays a role in enabling it.

I'll defer to this response if ever the issue comes up elsewhere. I'm tired of responding to the same bad faith, ignorant arguments.

Your entire argument is undermined by two major flaws:

I wonder if the big theme of this story turns out that Kuzuryu's grasp on physical reality is particularly tenuous, which is why she can slip into imaginary roles so easily, and also perceives animals as sentient humanoid creatures.

Except she doesn't appear to do the last one. 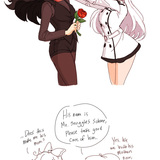 I thought Dashingicecream stopped doing any RWBY art after Volume 7 (presumably because of the Yang and Blake's essentially romantic interactions at the end, as Dash is a Monochrome shipper).

Well that was a cute update.

Kagoya (who may or may not be Bulk-san) is pretty mysterious. I can't tell whether or not she's supposed to be a yandere like Tayama (albeit one that is far better at concealing her nature from others).

^Yup. I think the author got fed up of not being able to go anywhere with their other series- after all, 'unrequited' is in its name! So he made this series to relieve their frustrations and do the stuff he wants to in that story lol?

Sorry to burst your bubble, but the description of this series outright states that it's the pre-serialized version and thus precedes the Unrequited series, which is evident in the art style differences.

"Though, you've usually gotta rush if you want to get one."

The initial comma is unnecessary, but the bigger problem is that "you've" should just be "you".

but I had the impression Akira was the one left out, never felt like she belonged in any circle (or triangle) at all, and her feelings towards Rin certainly felt one-sided

What are on about? Rin explicitly loves Akira back, it's just that her trauma from the last time she fell in love with two girls is making her too fearful of both acting upon her feelings towards her (and Rin) and accepting Akira's confession.

... Is Shiki wearing something under her bikini bottom here?

I'm surprised Tsukasa didn't take more than a couple of seconds to realize what the book he was looking at was about. What apparently-straight Japanese 11yo would be familiar with yaoi?

Shouldn't this be labelled as completed?

I'm guessing there are still omake chapters to be translated before the "complete" label is warranted.

At least Ryuugasaki owned up to having gone overboard with his teasing of Ushiwaka.

Ahhh that cowardly back down at the end is never a fun way to end a story. Anyways, thanks for the translation ~ <3

My impression is that she backed down so that she can do a proper confession later when there's no way for Sakura to assume that she's just drunk. 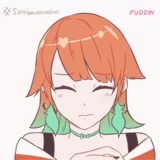 @SpencerSDH: Ever heard of "less is more"? It lets the viewer's imagination run wild.

You're welcome. I assume page 2 was not included because it's a blank page?

I forgot that Arisa dyes her hair.

... She does? What's her natural hair color, then? Why does she even dye it in the first place?

... How does she jump from apron to playboy bunnysuit? Is there a pun in the Japanese line that didn't come through in the translation to English?

This chapter makes me curious, has it ever been specified in this manga whether nonhumans are (un)known to the human public?

Probably a case of "the kanji used for her surname usually read 'Satou', but recently we found out that it the author wants it to be read 'Katou', which is a valid reading, so we changed it accordingly". That's what happens when the author doesn't think to check whether their chosen reading is the most commonly used one, and so realize they need to add furigana (small hiragana/katakana above the kanji) to clarify the reading.

In general, we won't be tolerating people who can't read tags in the future, hopefully drawing down on the need you describe.

What about complaints about the absence of tags that the staff constantly refuse to accept adding them due to SPOYLERZ? It's not fair to crack down on one problem while endorsing the opposite one despite it being equally problematic (just in a different way).

Waka doesn't even like the guy. She says it outright she only went out with him to keep him away from Momo.

Now they just have to wear suit-dress hybrids.