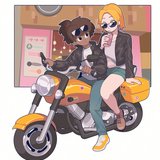 Ah, to have a motorcyclist girlfriend TvT 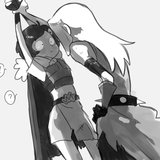 It's a fun show with wholesome found family relationships. I would not call it yuri but worth watching. I enjoy the Sash Anne Marcy interaction so much, they need more time together TvT

That's so cute! And we got a whole step by step recipes out of the manga too >v<

Deltasa333
The Marriage Partner of My Dreams Turned Out To Be… My Female Junior at Work?! discussion 14 Jun 11:54
Quote

I love knight heron and their dedication to the credit page... Now I demand the coffee location!!! Just kidding

Honestly, I do understand where everyone who hates this is coming from, but personally, these final chapters only further cemented it as one of my favorite manga of all time.

"It set up an interesting story but unfortunately it really did not deliver a satisfying conclusion and that kind of sucks, haha."

Talk about the story of my life! I've been both of these girls to different people at different times, sometimes the confused pining sap wondering what happened, and other times the sad mysterious beauty who disappears without a trace. Sometimes you find out what happened with that other person, but most of the time you don't. In turns you want desperately to know their life and have an imagination racing with possibilities, and by the other you are the object of intrigue who went through that life and know how mundane all of it was, the good times and the awful ones, and just want to be seen as a person. I mean hell when a co-worker found out where I grew up recently, we had a miniature version of that chapter where she imagined that whole crime story only for her to reply "no we basically just huffed glue lol"

I feel like this was one of very few stories to capture these feelings specifically BY its ambiguity rather than in spite of it, because the story isn't about the specific things that did or didn't happen to her--it's the tension, the wanting, the not knowing, the disappointment, but, most importantly, the genuine love that was shared. Does that love not exist, did it not matter if they didn't end with a kiss? Wouldn't the rest of those feelings be undercut if we were given a definitive answer and a tidy resolution? In other words, yes, it is unsatisfying, but as I get older and face more dissatisfaction, the more I appreciate a story that is specifically about the fact there are things that are unsatisfying, painful even, but are still worthwhile and meaningful to have experienced. Things that hurt, but you wouldn't trade for the world.

That juxtaposition between the heightened imaginary and the mundane reality is why I think the assault scene was included. After all, she spends so much of the story weaving these stories in her head of seedy intrigue with prostitutes and gangsters and being forced into sleeping with bad people, and then all of a sudden she's put into a pretty horrible situation herself. And it IS awful and it IS scary, but it's also stupid and clumsy and she still has to leave the hotel with this fucking guy and deal with the rain and go to school with him and live a normal life. It's an unthinkable thing to do to someone, but he's not a monster lurking in the shadows, he's not trying to control her life, he doesn't seem to have done it for any reason at all or even really think about it. It doesn't make sense, there's no satisfying reason it happened or what it means or how to conclusively react to it to get closure. It is one of the worst things to experience, and yet is completely mundane. That isn't everyone's experience with assault, certainly, but it is mine.

I don't blame anyone for not wanting to read that, for being deeply upset after reading it, but for me, this is one of very few times I have felt understood, and reading something that reflected my own life.

Thank you so much for finishing this, this is one that's going to be sitting with me for many years to come.

This is a really nice sum of the story. I am glad someone can put it to words!
Also, I really appreciate the translator for picking this up!

That is so cute. Bloody red is the romantic color, huh?

Lol what a plot. Would be nice to have a sequel

I love this one! It's good to see aromantic and asexual get into the romance. Love the ending, love the author thought process, love the effort they put into creating the story they always want to read. 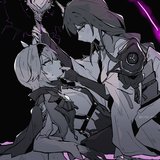 Consider how they skill work together creat one of the most dps team, i am suprise that not many people ship them.

A Sekihara Umina original without a confusing plot, what a shock!
I am sugar overloaded now

lol, I love how Rio simping over a Takarazuka Revue actress. Such an influential troupe for gei woman and yuri XD

Love a does of wholesome jnnn and mykr. This gets sadder knowing that they separate after the movie

This is the wholesome relatioship that everyone needed!
This has such MayaKuro vibe that I just can't stop giggling.

Ohh, never expected to see a manga discuss sexuality so openly. I am hooked!

"be my play girl". That kouhai really got her game LOL.
Does anyone know the pixiv, blog, webpage?

Deltasa333
On the Other Side of the Two Mountains discussion 02 Mar 23:08
Quote

^
This art style looks very similar to virgin empire. How come it is classified as non-moe?

There is progress. Both Shino and Nozomi are growing as people.

They have been doing the same song and dance for at least 80 chapters now, so I'm not really seeing it. They get closer, then talk about the dead guy, get upset and move apart again. Rinse & repeat.

Tbh, this manga feels more in tune with how people deal with grief (and ignore feelings) than the power of friendship that most shows have.

I'd like to think that Nana didn't scare those girl on porpuse...isn't?
P.s: Forget it, i already see the "yandere" tag *sigh

I suggested that tag as a joke but guess the moderator thought it fit here.
but have you seen banana in the movie

A yandere Nana appeared
I just want Junana to be in a healthy relationship :') Where is elsa arm? Or am I just blind?