That arm on chapter 7, page 1 is a denizen of nightmare...
...
long live sepia filter

And yeah, I wish it was a thing here too

But actually, they are! (assuming you live in the US) If you go to a Japanese supermarket like Mitsuwa Marketplace they do sell heated canned tea there. Its quite good ~

Oh hi, I see you live in these burbs as well. Or Hawaii. Or Cali, Jersey, or Texas. But maybe here. You can also buy the cans of tea there (or on Amazon), and heat them up yourself with hot water. It's pretty nice on a cold day, but a lot of work to heat it up yourself

Off hand, does anyone know which yuri hime this was in?

According to this tweet, it's from the September 2014 issue of Yuri Hime.

Heck yeah, thank you so much!!

What is the significance of alice dragging that bunny from the waste basket?

Her parents threw away her stuffed rabbit in an attempt to get her to grow up and stop pretending she's Alice. Now she's struggling with her feelings for Snow and trying to figure out if she is supposed to grow up and move on here or not. Turns out neither her feelings or being Alice are a phase, which is the extended metaphor people have been getting at

Off hand, does anyone know which yuri hime this was in?

I'm gonna be so smug if I was right about the phones. So insufferably smug.

This looks like a fun manga about the rise of the industrial class. Very excited to see the means of production over the next few chapters

Well, they could also just be a class full of fans of Nine Inch Nails and Ministry

Oh damn, I didn't even consider that. It would be the best possible outcome.

This looks like a fun manga about the rise of the industrial class. Very excited to see the means of production over the next few chapters I think she could rock the detached byronic hero angle

Falling in love, becoming delirious, and mangling some limbs are honestly pretty classic mistakes to make in a Hell in a Cell match.

Get rid of that boomer dictionary immideatly.

If this manga is also based in the 80s, depending on how old the MCs are, they could also be boomers.

That dictionary still sucks though.

Japan doesn't really have boomers the same way America and Europe do. This would be the work of some other generation! And fie on them. 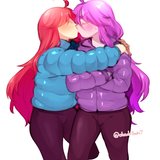 The first marketeers doujin on dynasty!!!

The second, we did this one as well.

I almost tagged it as "wholesome" but figured given the author people would think I was trolling...

You know, I bet quite a few of Yakumi Sarai's works could be wholesome. Might be worth a big ol' re-reading to tag some. Momizi Roll for sure

Now I feel like I should play touhou 18 though

the author/artist really don't care about trying to make this feel medieval-ish. It really doesn't bother me that much, but the anachronisms do kinda stick out.

I'm pretty sure they're intentional. I kind of doubt aonoshima is playing the long game for when this becomes more relevant at the end of the second series, but it's consistent with the otome game setting. Like with Relaire appearances, the manga has been a lot more aware of its worldbuilding and general content presentation. And it isn't laziness, the track suits are pretty detailed with the high collar and emblazoned school symbols/zippers. I guess I'm saying thought is going into the design and they do care about how fantasy-like it is. Whether or not the choices are effective is up for debate, but aonoshima is taking steps to include the game-ness into the setting

I feel like the "based on a game" tag would help this series if it wouldn't be such a misleading use of it. That aside, Rei scaring Claire when they were getting the assignment was hilarious

Oh, those type of uniforms won`t exist in their time, right?

The idea is that the story takes place inside of a Japanese dating sim, so the culture is a weird mashup of vaguely renaissance cultures, RPG mechanics, and artifacts from modern-day Japan.

Women treat buying gifts like a chess move. They think getting the perfect gift proves their love. I've learned that there is no perfect gift. I either get people something generic and universally useful, like a gift card, or just ask them what they want.

But really though, what the hell arc are we in? Is the story meandering or is this the birthday arc where Matsuri gets a chance at some character growth? The first parts seemed clear, like with the new student council crew, but maybe this is just a bridge to exams?

This just sounds like a long-winded way of saying "some people read stories wrong".

Then they shouldn't read the story wrong.

Being serious though, you can read any way you want. But if you try to discuss the story and want to persuade other readers, the first method is not the way to go because you're not using the actual manga at hand to make your points. How can someone else respond without a common talking point?

Altair Uploader
My Lover has a Secret! discussion 20 Aug 03:24
Quote

I think it's not yuri. IRL, I'd assume someone who felt that crossdressing "suited" them who preferred to socialize when others saw them as the opposite gender, was not cishet, but this is manga, so... it's whatever the author is thinking (unless you're pro-death of the author, then there's no definitive answer).

I'm more a "Death Of The Author"-guy myself, but even so the characters make it pretty clear that it's "just" a cishet couple with him crossdressing. I think "crossdressing suited me" refers to it befitting his physique and appearance, as specified in the next sentence, less so internal his self-image.

Death of the Author isn't really something you can be pro or against, it's just a simple fact (established in the 1960s) that the reader makes the meaning out of the story, not the author. For proof, read any comments section here, particularly one with an exasperated Blaastar, and you will see readers make up any story they want. The idea is that it is more productive to read the text closely to draw your interpretation because it is largely fruitless to divine authorial intent through the lens of fiction as if the author was confiding in us, and so that readers can discuss a story and try to convince each other of their interpretation with a concrete point of reference. I guess my point is that whatever the author is thinking is always irrelevant because we only have the text.

And a clarification as it does not mean that characters are like real people or that a story world should be treated as if it were the real world because we don't have or don't care about and author's explanation. I still think you have a valid criticism that the author's phrasing seems suspicious and even misleading in the reasons for crossdressing and time will tell if they're conflating crossdressing and being trans

For the record, that's a paraphrase of Barthes, not my ideas. Don't @me for plagiarism.

Now with new chapter tags, so you(!) can follow the side characters' story

Altair Uploader
The Tiles That I Cannot Cut Are Next to None! discussion 19 Aug 18:37
Quote

Altair Uploader
Homura-chan, Can You Take Me To Hawaiians? discussion 15 Aug 21:47
Quote

My interest here isn't in explaining the English language to people

Mine is though, so I'll give it a go

I'm so confused. What is this language crime that has been committed here?

I'm a bit confused too, but I believe the issue is that in practice English speakers put "the" before hotel names when referring to them. So you'd say "I got a room at the DoubleTree" even though "the" isn't in the name of the hotel. There are some exceptions, but they're exceedingly rare. Which would make the criticism for this translation that "Hawaiians Hotel," the resort this story is set in, is never referred to as "the Hawaiians" and is instead simply "Hawaiians." Which sounds super Engrish. To double up on that, "Hawaiians Hotel" is a Japanese take on a hotel name, so it also sounds weird. I'd hardly square the blame on the translator for not renaming the hotel to "The Hawaiian" (the only viable option to avoid confusion with actual Hawaii), particularly because that would necessitate a redraw and typeset of the resort name on the hotel itself while being a substantial localization call

Also I wasn't trolling, the second post above is the translator

Altair Uploader
Homura-chan, Can You Take Me To Hawaiians? discussion 15 Aug 00:23
Quote

It's probably not the best way to style it, but having "the" before a hotel name is technically optional (the Luxor, the Bellagio, The Venetian, Circus Circus, Great Wolf Lodge). I wouldn't call that changing the target language

Wait a second... you're the translator! Thanks for the anthology, it's great