Isn't Yuuichi his first name? Tate would be his last name.

BEST SHIP!!! Love this so much

I wish someone would use this setting for ships that are supposed to be at loggerheads with each other.

Or ships that hate each other with a fiery passion, mhm

They have first names?! LOL

shouldn't there be a tag Gender bender for yukari on page 8?

That's Ran, isn't it? What with the short hair and the Yin-Yang.

The text on page 8 translates to Yakumo Yukari

How is Aya a God girl? She is a normal Tengu last I knew.

It should have been translated as Wind God Girl in the title as well. No clue why the first word was omitted.

Tengu are sometimes considered gods, as is common for yokai

Never heard them referred to like that in touhou, where there are plenty real Gods, and the Tengu live lower down the holy mountain.and I don't think even mundane villagers would conflate them (though they are holier than humans & youkai).

Only the Great Tengu is considered God-like, but I don't think he is a real God either. 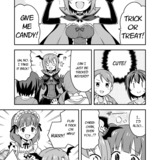 @Phil This is from the Cinderella Girls series so that isn't Yukiho, she's Riina

The cropping makes my skin crawl, but it seems interesting enough.

Even parts of the text were sliced off. I'd offer to help but I have commitment issues and have absolutely zero experience in scanlating, save for the skills needed to do it...

takes off wig to reveal slightly shorter hair of the exact same color
What is it with manga and forgetting that extensions are a thing and they're a hell of a lot easier and more real-looking than wigs?

In this case the wig is used to shorten her fringe, otherwise her hair usually covers her right eye and prevents people from recognising her. Somewhat surprised that the fans can't recognise Ten without her right eye though

I mean all Superman had to do was wear glasses and a suit and apparently the love of his life was completely flummoxed.

HAHAHA damn, wonder if she'd identify a llama as Clark Kent if it was donned a suit and wore glasses

takes off wig to reveal slightly shorter hair of the exact same color
What is it with manga and forgetting that extensions are a thing and they're a hell of a lot easier and more real-looking than wigs?

In this case the wig is used to shorten her fringe, otherwise her hair usually covers her right eye and prevents people from recognising her. Somewhat surprised that the fans can't recognise Ten without her right eye though

Wish Ah Ming looks as edgy as she first appeared in the story, or at least similar to the earlier parts. She looks so different now :(

I liked the art alot, is this the first time ive seen this Cinderella ship tho? Cause I kinda didn't get it....but then again I havent watched any new Cinderella episodes soo...?
Anyway, I wonder what ither stories we'll see from this author ^_^

They're depicted to be great pals in the Magic Hour radio dramas and have great camaraderie in the mobile game (not to mention teasing Mika to death together in one of the previous events). They are also sometimes shown together in each other's character cards. Shiki never showed up in the anime iirc.

For some reason I never shipped these two though, hmm... Or most of the girls for that matter. I wonder why? (; ;￣З￣)

Does Strawberry Panic complete? I was thinking it abandoned. but...where's the manga?

Strawberry Panic's manga ended at chapter 14 with a cliffhanger. Seven Seas has published the entire series as a single collection despite that in 2010, so it's safe to say that it has ended serialisation in Japan long ago.

Can't help you with a link to the manga though, since I don't read it online

For the complete story, you could try looking for the light novels instead but I can't remember whether there are any discrepancies in both versions. Probably aren't any.

The pun was the yukata with「殺」printed all over it.

What a pun. My brain just twisted a little.
Thanks for the explanation :)

I call B.S. on the younger sister thing, that's Tomo! I swear it! She faked her death and everything is okay now.

--- Spoilers Please dont read if you havnt read the manga (I suggest you do if you havn't its a awesome hour read) ----
Well tbh you could actually be right, which in my current mindset I'm agreeing with so I don't cry ._.

Does anybody remember her mom saying something along the lines of " I wish we could of lived happily just the four of us " (Mom, Dad, Tomo, Little BROTHER) And + the "little sister" ( if that wasn't Tomo ) was at least a near adult and would of had to been a sister of the Tomo to even look like that so why didn't she live with her Tomo...?

Also the "little sister" has the same glasses, same outfit that Tomo wore earlier in the manga and put her hands in her pockets the same way......

Finally Tomo said "Don't wait for me" that means she planned on coming back.... (+Her body was never found)

Anyways past my blabbing I really feel like that was actually Tomo and the author is just playing with the readers who don't pay enough attention. ( Hopefully ._. )

Did some research at 1am while mourning over Tomo's 'death' again, and I have come to the conclusion that the 'Tomo' (decided to call her Chi instead to avoid confusion) is Tomo's younger sister.

First of all, I confirmed that she is definitely not Tomo as:
- Chi has the same hair colour as Tomo's stepmother
- Chi shown no signs of aging, as compared to Ai who now has some eyelid detail to denote her aging.

Secondly, it is also confirmed that Chi is definitely not Tomo's younger brother as:
- Chi has eyelashes, which shows that she is a female. Shuninta never draws her male characters with eyelashes (with reference to Ayame 14 vol 2 where at least four male characters were shown to support my assumption)
- Difference in facial features, as Shuninta does not depict her characters with a drastic appearance change as they age (again, with reference to Ayame 14 vol 2, which shown Ayame and Sango as children, teenagers and adults It'll show up eventually on Dynasty Scans ^^;;)
- Chi stated that she was born after Tomo disappeared. Tomo's brother was born already.
- Subtle boobs
- It would be in bad taste to depict Ai falling for Tomo's brother, since Shuninta is so well-known for her yuri works. Just my opinion.

Hence, my conclusion that Chi is Tomo's younger sister.

Also did some quick calculation on their ages based on what I know, which may be wrong so please correct me.

At the time of Tomo's disappearance, Ai should be around 19 years old since the common age for the Japanese to enter university is 18 and Ai is into her second year already, iirc.

End of report, I'll show myself out now o-o