Ephemeral Dreamer
That Time I Was Blackmailed By the Class's Green Tea Bitch discussion 12 Jan 23:15
Quote

The Honor Student has some big Power Bottom energy that I'm just absolutely here for ; )

Ephemeral Dreamer
I am not a Succubus! discussion 02 Dec 05:26
Quote

Let's also not forget the one time Sakurako tried to kiss Seri while drunk https://dynasty-scans.com/chapters/a_room_for_two_ch27#4 Kasumi was very quick to pull her leash so to speak ; )
I can understand people getting frustrated because their relationship has developed very gradually without a lot of drama and neither of them has really felt the need to give it a name or really talk to much about it.
Their comfortable and intimate with each other and are dedicated to sharing their live with each other. That is the important part and both of them understand this.
I'm sure, Sakurako at least, wouldn't mind going "further" but Kasumi has made it fairly clear that she isn't really interested and Sakurako understands that and doesn't push the issue to much.
For all that she can be clingy and occasionally a bit stalkerish, Sakurako is actually pretty good at respecting Kasumi's space and backing of anytime things get to much for her.

I just want to point out that Koruri and Moka have made more progress in their relationship in one chapter than Sakurako and Kasumi has made in almost 50... -_-'

To be fair Sakurako and Kasumi basically went from 0 to 100 within the first few chapters.
If you skip all the early stages and go right to happily married there's not much more progress to make^^

Being more serious the impresion I get is that Kasumi is simply Asexual and just not interested in more than cuddling.
If you look at it from that perspective their relationship makes a lot of sense Sakurako would probably be fine and willing to go further but she can tell that Kasumi isn't really interested in it.
They're relationship is clearly romantic something that is acknowledged by basically everyone arround them but it doesn't have to be sexual for it to be vallid^^ 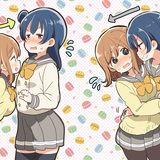 Man Mezashi's portrayal of these two is just top notch^^

So I guess you could say that the evil organisations general was...
Honey Trapped ; )

Honami: "I don't have a crush on Konatsu-chan. I just think about her a lot and when she's not there it ruins my day..."
- almost literally the plot of chapter 10

Adorable^^
Established relationships are nice too^^

That was fun.
You know if this continues it may end up as my favourite Rap Battle Yuri Manga^^

Oh my God I literally smiled on every single page :)
So cute this made my day so much better^^

I like this kind of fairly subdued sort of drama where the Angst isn't realy the fault of anyone but simply because well feelings are complicated there's no villain here and honestly there's probably no perfect solution but neither is anyone realy to blame.
Not sure what exactly I'm trying to say but yeah enjoying this and curious to see how this ends

It's a really good game yeah somewhat expensive but one of the best Yuri games arround.
I love AnoYuna and I love HinaYuna^^
OT3 is the best^^

god this is so adorable^^

totes adorable^^
I love Ruby's face in the last panel it's just so...
Ganbanruby^^

Yay lets get some more of those two So nice
So Adorable^^

You know I'd probably be a lot more worried for Yuzumori if Mimika weren't about as threatening as an overweight hamster...