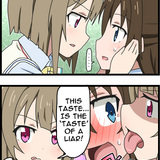 i get that stardust crusader is the most popular part so most people instantly think of the ora ora ora, but men it always saddens me that people don´t give enough love to bruno s unusual way of detecting lies and his ari ari ari ari ariverdecci

everybody knows jojo and love live share the same universe 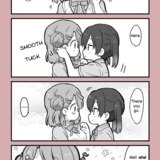 tovarisch feels really rushed to me. it's clear that all the characters are well designed, but they didn't have time to breathe. seemed like too much content was squashed into too few panels, and as a result it was extremely chaotic.

I guess you're right tovarisch was chaotic, wich to me was part of the charm of the series, i just love how over the top was, some jokes land some others don't but i think the tone of the manga fits the characters perfectly,
it was rushed and hard to follow and despite all the time put into the side characters some of them still feel shallow so i can understand why some people hate them, but to me tovarisch was so funny and unique that i don't really care
I just have a soft spot for tovarisch since it was one of the first Yuri mangas I've ever read so take my worlds with a grain of salt

this series by contrast has had enough time to explore the entire ensemble cast, and its much better for it

And yes i think come rain or shine is a more complete manga overall, i still miss the comedy but if it means i can read an Arata iri manga without being axed i guess is woth it

So i am confusion kuzushiro explain explain

She can´t keep getting away with it

i think arata iri puts a lot of effort into writting her characters a lot of ppl like to trash the side characters on tovarisch but i think they´re really well written, all of them have well defined personalities,they work really well as a group and the way every characters act differently depending on who they are talking to is something i rarely see on manga,

i think is the same with this one, the side character really stand on their own

i don´t get this series at all i think is cute how they find comfort on each other but i don´t get that werid tension between them, im not sure what the author is going for

benja
A Story About an Amnesiac Lover and Her Family discussion 13 Oct 02:11
Quote

This manga is the answer to the question, "What if Mochi au Lait rewrote that one play from Bloom Into You on a particularly bad day?" 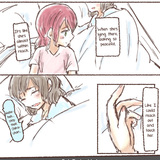 i think im gonna skip on this one i really tried to enjoy it, since hanjuku joshi is one of my favorites mangas but the new characters are really boring and the whole cheating stuff is like netsuzou trap but worse

edit: tovarisch has such poor pacing that i can't really even follow it. come rain or shine is so much better.

So you have choosen death,

Jokes aside i also think sougou tovarisch has problems with the pacing , the last volume being the most notable example.

But i can't be too harsh on sougou tovarisch knowing that it was axed, besides kanna an yuu are probably my favorite yuri characters of all time, specially kanna and i'm a big fan of Arata iri comedy, so at least for me sougou tovarisch will always be Arata iri Magnus opus
Besides the extra chapters are the best if only we could get more

Welp looks like the sequel's gonna be written by itou hachi

Lol i was about to say something along those lines, when i saw small bazu i had a , "i don't like where this is going" moment

benja
The night turned out to be hot discussion 11 Sep 20:18
Quote

YESSSS finally it´s over, now we don´t have to keep reading the manga anymore

No one is forcing you to read something you don't like, just saying

the 5+ years i´ve waste reading citrus force to read it until they fuck or/and the manga gets good again, and the first just happend so i´m finally free, the second may or may not happen some day one can only hope 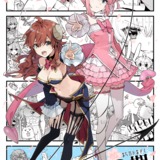 benja
The night turned out to be hot discussion 11 Sep 19:22
Quote

YESSSS finally it´s over, now we don´t have to keep reading the manga anymore

Well there's a lot of subtext but i'm not really sure if there's gonna be Yuri, I've heard that Kirara mangas usually have strong subtext but never go all the way 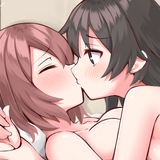 I find pretty wholesome how unconditional and caring is matsumoto, too Bad She's probably gonna get emilia'd 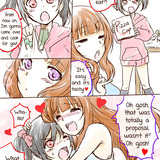 ^a man of culture i see

I don't get why ppl like the haru x matsu so much, they don't have any chemistry at all, there's times where it seems like Harumin legit can't stand matsuri, and maybe i'm wrong but i don't think Harumin is supossed to be a tsundere character

I mean yeah yuzu and mei are pretty much like that, but at least saburo uta makes sure to remind us every so often that despite all the evidence they love each other and are in fact dating

i don´t usually give too much tought into these kind of mangas (regarding the third story), but whenever the story acknowledges how fucked up the characters actions are, but keeps going for it despite that, it breaks my suspension of disbelief and inmersion.I mean im not going to lose my shit for of it, because you know, is just fitcion, but it´s weird anyways, i have this same feeling with wataten