This series is so fantastic. It's the perfect balance of slice of life comedy hijinks with actual character growth and romance. I love it so much

Jesus that was an emotional sucker punch

What an absolute trash fire lmao.

I am a trans woman dating a nonbinary afab person and I thought this story would go in that direction since Hime always seemed pretty disillusioned with being perceived as a girl. Instead we got after school special-quality vignettes about the lives of random characters who are never relevant to the plot again, and a main character whose entire emotional journey leads her to... being comfortable with being a straight woman?

I guess the message of this series is that it’s okay to be LGBT as long as you’re an accessory to a generic het romance. I can’t believe I used to look forward to new chapters of this. 2/10 because I at least enjoyed the bits of lesbian content at the beginning

Madame_Firenze
Run Away With Me, Girl discussion 25 Jun 08:17
Quote

This has vaulted its way to my top 5 list. Absolutely brilliant. This isn’t the type of manga that begs an adaptation, but gosh I would love one.

Shout out to the friend for being a good wingwoman 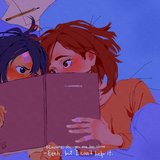 Awww, that was adorable

It's because you're my friend that I have to suck you. What a sentence!

In conclusion, just kiss you idiots

The formula of this manga isn't something I'm necessarily opposed to. Slow-burning romance with chapters focusing on different side characters can be very effective. There are just a couple of problems with this:
- The side characters are poorly fleshed-out to the point that their existence feels totally tangential to the main romance. They have their little side story and then become complete satellite characters, only useful to the plot inasmuch as they consult the main two characters. It makes them feel like cardboard cutouts more than human beings. What can I say about the asexual teacher as a character other than the fact that he's asexual? Bloom Into You, in contrast, has a cast that keeps growing and has their own experiences outside of their relevance to the main romance.
- Tied into the first issue, the way that information is conveyed feels very after school special. The characters' side stories feel like the author is saying, "look at this type of person. It turns out that they're actually people! I bet you've never thought about THIS before!" Again, their potential to be interesting characters is sidelined in favor of their use as tools to advance the plot. For instance, the story could weave a side plot about Yukka coming to term with her feelings, but we haven't really had any advancement with her since her chapter.
- The reasons the characters give for their actions are very contrived. I don't expect teenage characters in romance manga to act rationally, but we don't have time to see for instance that Akira's feelings for Hasegawa were just her projecting her idea of what a girl "should be." We are told more than shown the ways that the characters feel; there's not enough buildup to these huge emotional moments. It feels like the author has a plan of how this is going to progress, and it just sort of progresses mechanically from plot point to plot point.
Overall this has a lot of potential and I love stories about trans characters, especially romance between trans lesbians and cis lesbians (since I'm dating a trans woman lol), but I just don't have any patience for this anymore. Even My Unrequited Love, which is a bit melodramatic at times, still doesn't make me sigh in exasperation as much as this manga.

Madame_Firenze
Run Away With Me, Girl discussion 05 May 19:50
Quote

This story is absolutely fantastic. The characters have grown and changed so much (much more than in most romance manga). This author does an amazing job of giving you hope and then ripping it away from you in the most heartbreaking way possible. This has got to be one of my new all time favorites. 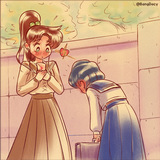 I've been watching Sailor Moon with my girlfriend, and while I personally ship Mako x Mina, this is very acceptable to me as well. Especially considering the dance scene lol

THE PLOTLINES HAVE CONVERGED...

My girlfriend (trans woman) and me (afab nonbinary) read this together and enjoyed it a lot. It really does feel like the kind of interactions we have during sex. I really love this doujin and I reread it pretty regularly. Obviously it's probably not intended to be trans representation but it definitely can be read that way. It's just so intimate and romantic, it's wonderful.

Madame_Firenze
An Aside Told to You discussion 04 May 18:56
Quote

This is full of clichés. But they're all my favorite clichés, so I'll probably love it.

Also what's up with "wanting to shine?" Is that a particular Japanese idiom? Because it's used in a ton of yuri or yuri-esque properties with a performance component (Love Live and Revue Starlight off the top of my head)

Cool Down is just... the best. Give her a girlfriend dammit!!!

Madame_Firenze
I Went to a Lesbian Brothel and My Teacher Was There discussion 14 Apr 21:47
Quote

This was awful lol

Madame_Firenze
The End Of The World And A Witch's Love discussion 19 Jan 18:51
Quote

as someone who really likes getting bitten... yes