Luuuk
The Promise I Made to Eve discussion 12 Jan 01:51
Quote

honestly she might have made her a loli out of an internalized desire, that she might not even notice, to give a child the love her garbage mother never gave her?

I see a certain famous artist's death in the near future.

Luuuk
The Promise I Made to Eve discussion 11 Jan 21:28
Quote

i hope she sent her mother to be scrapped and left to die a painful death for being such a cruel mother to a sweet child.

Sweet Nail and its sequel (not translated), All These Names and Love Strategy are all also part of the Restless Kiss tankoubon. From this tankoubon there are still 2 more stories yet to be translated, for anyone interested.

Sweet Nail has a sequel? Where can I find it!

also sorry for taking so long to answer, I took that long to come back to reading this again

you're welcome, glad i could help :)

this artist is the same as the artist for cinderella matchmaking:
https://dynasty-scans.com/authors/ahiru
here's the link for the thread about it on their twitter:
https://mobile.twitter.com/ahiru_draw/status/1100362012540907533

boy she got completely outsmarted and outplayed.

your girlfriend is in danger!!

Uh, are we reading the same series? Cause if so, it's the new editor who's in danger.

Does no one else think that, regardless of whether or not Mahiro has feelings for her, she's kinda trying to put her on the spot to make her realize how her thoughts come across? Like she's forcing her hand so that she either decides to leave Kaori or realize that her thoughts and refusal to talk about it with Kaori are quite frankly pretty stupid and selfish.

I wouldn't put it this strongly, but yeah. Yukawa-san isn't being stupid or particularly selfish – Memo 12 starts with her musing on the fact that she's never really been in this position before. She doesn't really know what she's doing in this increasingly serious relationship with another woman, and is frightened of hurting Mizuki-san or getting hurt herself. She has a small inferiority complex due to how inexperienced she feels at her age (and given the age gap between her and Mizuki-san), and as a result tends to discount her own worth when set next to her girlfriend.

Mild spoiler: we're about to go into a flashback and see the history of Mahiro and Yukawa-san's friendship, which in turn puts what Mahiro is doing here into context. Mahiro knows Kayoko pretty well, and both likes her and isn't afraid to give her a semi-playful shove when she needs it. It's maybe a little pushy to put it in terms of "or we could date… just joking… unless…", but she's only human. I think it's more sweet than manipulative. One of my favorite things about this very fluffy but calm story is that there are no bad people in here.

Aside from the adult life / workplace setting, what I like best about this story is that it follows the relationship past its earliest steps into the much more treacherous terrain of actually doing the work to build a strong connection between two people, and that while the feelings are big, the drama is pretty small. I love the way the story shows two people, neither of whom are very experienced with relationships or love, who didn't expect to be in the kind of relationship that they're in, just trying to work it out as they go along. It feels very real to me, and the way they consistently treat each other with respect and kindness makes me root for them.

I'm sorry, it's quite frustrating seeing Kaori opening up to Kayoko that much and being pushed away like that, and Kayoko's thoughts might not seem like all that selfish, but first of all, it comes across as if she doesn't trust Kaori to not abandon her, even if she keeps telling herself that it's because she's not "worthy" of her or something. I get it, the way I put it is quite harsh, but honestly, if someone is opening up to you and being that kind and willing to listen to you, but all you do is decide for yourself how they feel in their place, then I'd say it is quite selfish. I agree with you though.

Also, I'm sure you noticed I'm not the best at expressing my thoughts, so I have no idea how to say stuff like this nicely.

Does no one else think that, regardless of whether or not Mahiro has feelings for her, she's kinda trying to put her on the spot to make her realize how her thoughts come across? Like she's forcing her hand so that she either decides to leave Kaori or realize that her thoughts and refusal to talk about it with Kaori are quite frankly pretty stupid and selfish. 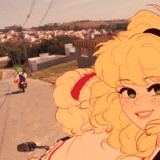 Hmm, I assumed Yuuka cause the original post this is a parody of, the boyfriend is the one driving the bike, not riding it on the back.

^ Her friend is Alice, and Alice's girlfriend is Yuuka.

"We" includes the girl being cheated on lol

It's so cute that everyone who read it should be put on quarantine to see if it's contagious and lethal.

Why would he ask Saki if she likes Shizuku if he doesn't realize they're gay, when Saki liking her at least as a friend is more than obvious?

After Nurse Love Syndrome I cannot, for the love of me, read "Chief" as anything other than "Shunin-san" in Kaori's slightly irritating but cute voice.

Luuuk
Her Elder Sister Has a Crush on Her, But She Doesn't Mind. discussion 19 May 21:37
Quote

I like their mom. She knows the good stuff.

Luuuk
Getting Even Closer discussion 19 May 09:42
Quote

Sweet Nail and its sequel (not translated), All These Names and Love Strategy are all also part of the Restless Kiss tankoubon. From this tankoubon there are still 2 more stories yet to be translated, for anyone interested.

sure it would be better if they took the time to hash out what they were okay with and safe words and such, but they are young and probably just don't know better.

hino has never forced koguma to do anything. koguma willingly accepts her fate bc she loves it. she was so happy to hear that hino likes her body, despite feeling self conscious about it. hino makes her feel cute and wanted.

That last paragraph sound so much like the modus operandi of a pedo, that I'm actually worried next chapter we'll have Hino offering Koguma candy as an apology, but she'll need to get inside the van to get it.

But they're both kids lmao.

And in the same class, thus presumably the same age, on top of that.

Her life is flashing through her eyes. She about to die from gay, right during their wedding, no less.

Tadokoro-san is accidentally making Nikaidou-san more and more of a pervert.

As far as I can see, she did that well intentionally. No accidents there.

That's what I call a cleaning job well done, even the text couldn't beat it.

Is this the end?

Not yet, but if it's supposed to end after everything between Ayaka and Yurine has been settled, I'd say we have only this volume left, and maybe one more at most after this.

I wish it wouldn't end though, I enjoy all these different couples way too much, and I'd be happy if Canno continued the story introducing new couples and sometimes going back to older ones, after everything is said and done.

You guys are all wrong...this is the work of A 『ＳＴＡＮＤ』!

You can clearly see the pain in those eyes, that she endured with a smile on her face.