48 is a different event and will most happen later in the season.

...how? They are nothing alike besides the MC wanting to marry into money. 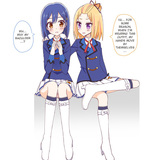 Man, I usually don't like to complain about people's ships but I feel sad about the ratio between CocoYaya and PapiCoco.

I don't get why authors give a damn about free exposure unless they plan to get their work officially translated. But this series doesn't seem like one that will ever get an official translation.

Well that was unexpected...

With people talking about the two Pures eventually crossing paths, I assumed that the time travel here works like The Butterfly Effect where her mind is sent back in time to her body in the past so there is only one Pure at any given moment. No paradox and no self-rivalry.

more than friends, but less than lovers....best friends then?

I believe this line means "they like each other but are not dating, yet." If we believe what Pure is saying is the truth then they most certainly are lovers and are going to get married. But that's in the future and the manga will focus on their relationship and antics before they become actual lovers.

I think I understand the basic premise to this story but it's told in such an incoherent manner that the small important details are almost completely absent. Giving it a meh/10

I still don't get why everyone is in a tizzy just because two people pointed out that the girl is a slut. Dates lots of guys(fact), sleeps with guys after a short time of dating(gossip), kisses at the first sign of affection(fact). She's a slut, if you think being a slut is fine then so be it. Being a slut can be a part of her character too and can lead to future drama, so why try to deny it?

It's also funny you link Angelic girl considering The girlfriend was only thought of having dated only one guy and was actually "pure" anyways. Then the girl who tells her she is obsessed with purity finds out that her own girlfriend slept around she calls her a slut.

This series gets better and better. Was not expecting a love confession so early and from the MC first, and best yet it solves the immortality problem.

Why did they get so angry at her for cheering for the other team?

Now this is the perfect kind of one shot. Cute, happy end, coming out, no need for a sequel but makes you crave it.