Kaede should be comforted. Author-sama looked down and realised Kaede would sell as a gravure idol. So Author-sama changed reality so it was her choice not to go for the exploitive look. 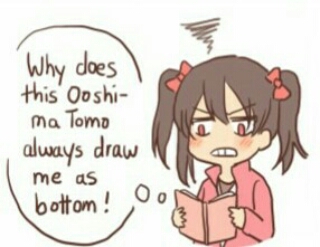 Marion Diabolito
I Know All About It discussion 22 Oct 09:25
Quote

I hate it when series drag on and I hate it when they finish. Tanaka needs to realize that everyone but her can see it. They should double-date with the girls from Renai Manga. Who would set them straight or, no, not straight.

This isn't quite the topic but I couldn't see another thread like it, so ... Are there any yuri manga or doujins where one of the people has a twin sister and they switch out with their partner without telling them? It's kind of a staple of hetero comedy manga.

Marion Diabolito
I Saw Another Cute Side of My Girlfriend Because I Picked Up Her Underwear discussion 21 Oct 21:27
Quote

I honestly thought she had a twin sister for a page.

Marion Diabolito
A Story About a Girl Who Cut Her Bangs Too Much and Her Girlfriend Who Fully Supports and Comforts Her discussion 20 Oct 20:09
Quote

Ehhhh could be fluffier! 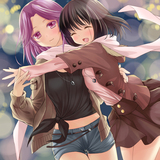 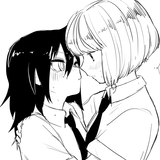 Kimoi can mean creepy too, and given Tomoko's appearance when Ucchi met her, I lean towards that interpretation. But you're right either way. Kimoi キモい is in katakana and it's short for kimochi warui 気持ち悪い (feeling bad) which means either gross or creepy. And when you're talking about a person, あの人なんだか気味悪くない? means aren't they creepy? And I bring this up because Tomoko isn't filthy or anything. Yes, Ucchi probably does think lesbian stuff is gross, but when she's talking about Tomoko, my suspicion is she's saying she's a "creepy girl" or "creepy stalker." Yes, we see Ucchi as the creepy stalker, but she sees Tomoko that way (or did, and now she can't understand why she misses it).

I think younger Nanasawa will twig. That bit about slipping through time was probably a semi-conscious way of confessing.

I'm just bummed because they are such a good couple.

Wow, 12 authors and nearly 120 pages, isn't this an anthology rather then a doujinshi? Also, why are there only 6 authors in the tags?

Anw, all of the stories were so freaking cute!!! I especially like October and December. I kinda wish there were more stories about adult NicoMaki though.

Also lol, what even is lactobacillus day?

Adult NicoMaki is really hard to write unless you go for an AU.

It's very hard to keep them together once Nico graduates.

When this sort of thing happens with BuCap in some Hakkayata doujin, it's more charming. But the girls in Love Live! seem way more grown up than in Saki, so it's a little disturbing. Probably because of the plushies, because Maki becoming a little girl in the OVA was definitely charming. It's heartwarming that NicoMaki would still be love even if one was a plushie.

Everyone: MC is scum
Me: Considering what she knows, younger her is lucky she's not strangling her.

However, there will be a point where she has to reevaluate cuz younger her is stepping up, finally. 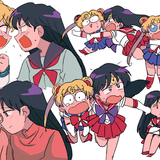 It's weird how into girls Usagi is, yet she's always going "oh, okay," and trotting off to be with Mamoru. Maybe you have to be an Outer Senshi to be allowed to be with a girl. With Usa-chibi/Hotaru they're invoking Hotaru's license to gay.

I want to know how the potion gets keyed just to her, and other science facts.

Bad news - the serialization's already been cancelled due to the author's poor health. It only got up to chapter 1.4 before she had to stop...

That really is too bad - she was outdoing the Japanese tsunderes. Anything you can tsun, I can tsun derer. 4 chapters out of 17 are scanlated (plus 2 special sections and an Epilogue), so there is plenty to look forward to. Just grateful someone decided to pick it up again. It gives you a new appreciation for Ongoing vs abandoned. The poor MC, being born into a fanservice slapstick comedy! If this were a shoujou series, she'd be trading sexual favours for getting pingpong boot camp, running off the extra fat, and wearing a sports bra.

Marion Diabolito
No Dignity for the Captain discussion 07 Oct 20:40
Quote

Maybe it's autobiographical and the manga artist was so depressed over her humiliation as a table tennis captain she couldn't lift her pen for seven years. If that's the case, we should be respectful of her pain.

JK the last volume (3) has chapters 12-17, Special Section 2, and an Epilogue. So there are 5 or 6 chapters per volume. BTW the title of the Epilogue would be a spoiler, and it's a good spoiler, not a bad one.

I keep re-reading this and commenting sorry. The credits in one of the chapters had something I missed. They filled in Haruka's missing threat at the end of her voicemail with a reference to "Ringu." That would make a great premise. Somehow an editor curses her beloved mangaka so unless she meets her deadlines within seven days, she'll die. All sorts of problems crop up, and they have to fight them together. It's the basis for a new Fluff Horror genre!

I really ship them so hard, but an editor and her mangaka is typically pretty taboo. Maybe Kodama Naoko's Renai Manga? They were definitely wife and wife by the end, but even there, I don't think they had a kiss. And Seiko's art is definitely way less moe than Ritsu's. They do share a joint moral: If you're somewhat helpless, but have large breasts, your editor will adopt you and put her life on hold for you. We learn something about the manga industry with each new edition.

Another big change is that in the WN, Algard doesn't join in, and it's an ogre, not a dragon. Apparently the LN/Manga don't want to put off the total sibling armageddon.

Euphelia is Iris Lana Armelia of Common Sense of a Duke's Daughter and Anne-Sophia is Agatha Heterodyne of Girl Genius, if you took the reincarnated person out of Iris and popped her into Agatha. If it's like Koushaku Reijou No Tashinami then I suspect the baron's daughter is a mole. And Anne-Sophia is clearly a "Spark."