Hey Goggled Anon, i wanted to ask you something. Do you have a translation of the "Afterword" that is included at the end of Vol. 2?

Skipped it at the time of translating.

It seems the manga name is 'Yukidoke to Agapanthus' in the original publishing?

I presume 'yukidoke' is snow thaw in Japanese, but what the hell a word is Agapanthus? Is it like love letter in Greek perhaps?

A quick google says it's a type of flower, also known as Lily of the Nile or African Lily. The genus name is derived from the Greek words for "love" (agape) and "flower" (anthus). Also "love letter" is apparently one of its meanings in flower language.

Looks like the scanlator spotted and fixed it.
(The pre-corrected version had "I fell asleep" on p4 written as "I feel asleep", which is identical to an infamous localization error from Metal Gear on the NES.)
edit: reads text under username more closely Ah, I see what you did there. 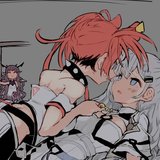 Now I just want a version of this where instead of Irys, we have Kobo wanting to play Valorant. 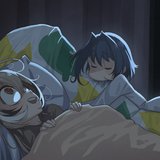 Honestly I'm surprised I haven't seen any Kronii x "Marge, I want to be alone with the sandwich" art yet.

No, my friend. This is tailsex.

Goggled Anon
I Became a Slave in Another World (pien) and to make matters worse, My Master is a Black-Hearted Elf Queen! (But She’s Super Hot. (note: v. impt.)) I’m Pretty Useless, So I’m Getting Barked At Left, Right, and Centre, but the ORC I’m rooming with is [...] 26 Sep 18:35
Quote

When the title's so long it can't even fit in Dynasty's database.

That page with the characters recreating the meme was good lol.

Incidentally, Sometime's original draft for the page was going to feature more lifelike depictions of foreigners (If it wasn't already obvious, the title is a reference to compilations of Overseas Reactions to Smash Bros. trailers), but the editor thought it might be a bit too much for Kirara readers so they went with the IGN meme template instead.

wait, so let me get this straight, you guys have scripts for the rest of the chapters and just are waiting for a typesetter?

I'll typeset for you guys. I can have this done in a week.

Goggled Anon
I Won't Sleep with You for Free discussion 19 Sep 15:53
Quote

Okay let's be frank: it's all bs about this being her first time, right?

Honestly, the main story would've been fine with just one change: if Alice's sexual assault had actually been planned by Nanase as a very fucked up way to make Momo jealous (someone in this thread actually speculated this at the time). It would've been perfectly in character for Nanase and Alice's character arc would be a lot more tolerable.

Alice? Who the f is Alice? And why have I been living next door to her for 24 years?

Goggled Anon
I Won't Sleep with You for Free discussion 18 Sep 20:09
Quote

I’m well aware. But the title of the chapter is that she’s a huge introvert.

For comparison, the JP title is 佐山さんは超内気 (Sayama-san is Super Shy).

Wait wait wait! I'm confused.
Did she say she's going to make the big decision tomorrow?
Or did she say: "I have decided! Let's start going out from tomorrow on!"

It's the "go with me somewhere" definition of 付き合い (I kept the wording a little vague since I don't know what Kyouko's got planned).

Why does that girls hat keep disappearing?

From what I can tell, outside of when they literally come off for story reasons, they disappear whenever they're in the yuri void (pay attention to the background). Basically the yuri version of when Mortal Kombat games remove masks and stuff during X-ray attacks and fatalities.

If it's anything like Yuri Hime, which also released today, it's cos the 18th falls on a Sunday this month.

This is great, but I'd recommend using "koban" instead of "police box". "Police box" carries a different connotation from koban, one more mobile...and deep blue.

I'd like to think most of our readers can tell the difference between a smaller-scale police station and a Tardis.

Part of me would be curious to see this premise handled a tad more seriously, but I can live with a light comedy about cute bubblehead cops too. Happy slice of life stuff with a yuri angle always makes for a fun read in my book, I'll never get tired of that, even if it's not aiming all that high.

If you're willing to trade off yuri in favor of slightly more seriousness, there's always Police in a Pod, which leans a little more into the "this job is a bit shit innit" aspect of being a koban policewoman.

Goggled Anon
My Best Friend Who I Love Fell Completely in Love With My Vtuber Self discussion 11 Sep 14:19
Quote

I've noticed a lot of series end with a chapter that shares the title of the series, but this chapter doesn't seem to conclude anything.

Just noticed what you were referring to and yeh, that's a mistake on Dynasty's part. The chapters don't have actual names (those are only really given to one page strips that aren't explicitly labelled as .5)

Goggled Anon
My Best Friend Who I Love Fell Completely in Love With My Vtuber Self discussion 11 Sep 13:24
Quote

Is this supposed to be the final chapter?

Nope. ch26 just dropped on the author's socials today. Last page for this set is just a post-Comiket skit.

Great start... and possibly heading towards 'idiot couple' territory, though maybe not quite.

They've already filled both criteria in a single chapter.

Is this series “Dropped” or “Hiatus” or “Completed”? It’s been too long between updates.

It's "it updates when there's an update". The chapters are effectively compilations Nagori posts when they've posted enough things on Twitter, and given that they've got a gizillion different Onee-san concepts, it can be a while before it reaches that threshold.

New chapter is out in Comic Hotmilk. Can't tell from the preview images who it is exactly. One woman might be Ui but I don't see any glasses. Could be an entirely new pairing.

To give a run down of the characters.
Since this is effectively the start of a new volume, we're apparently once again starting with a fresh slate of characters. This chapter's about a rookie voice actress (who of course has slept with Ikko) moving into a new place where she sleeps with the landlady in exchange for cheaper rent. Also the landlady is fucking her female cousin, completing the yuri incest triforce.

Series is still going (though how the YH translations are going I can't say since I'm not on that particular series). Author just decided to close their Twitter account around the release of the new versions first volume and focus on Pixiv/Fanbox.

Goggled Anon
I Won't Sleep with You for Free discussion 02 Sep 19:02
Quote

Chapter 3 is hysterical, the comparison between superchatting a vtuber and paying for a prostitute is... really something

It's even funnier if you're familiar with the concept of "rainbow superchat". You can probably look up corresponding clips to get the gist of it, but to explain:
A rainbow superchat is when a single user (either with their own single account or multiple conveniently named alts) send in seven seperate SCs each corresponding to the seven different colored tiers: Blue (100 yen), Cyan (200 yen), Green (500 yen) Yellow (1000 yen), Orange (2000 yen), Purple (5000 yen) and Red (10,000 yen), with a rainbow costing a minimum of 18,700 yen (Asakura-san is paying much more than that, of course). Alternatively some people send in the "low-cost rainbow", which is seven 100 yen SCs sent from seven alts with colored avatars.