nightblade96
My Best Friend's Engagement was Annulled. I Need To Do My Best To Stop It! ...But I Was The Reason Behind It... discussion 12 Dec 22:42
Quote

I wonder what causes more discourse here. People mad that bisexuality and polyamory exist, or the cheating-themed stories we occasionally get.

Why would it make you biphobic or polyphobic just because you don't like a story because a dude is involved in the romance? By the way, the problem is not that, the problem is that it has the tag "yuri" when clearly it's not,and it is basically why most of us are here, for a romantic relationship yuri

There is a nice history of people posting biphobic and polyphobic nonsense on this website. You can have a different view, I don't think anybody is lumping you in with those people. As for the tag, this title is clearly from the Yuri Villainess Anthology. Given how the story plays out, I think it's a pretty safe bet to trust the author/editor intentions rather than replacing them with some other interpretation.

This is NOT a yuri-only anthology, and was never promoted as one. It includes yuri but it is not SOLELY yuri.

Wow, is that cover serious? Way to fuck everyone over.

No point even continuing this shitshow if that's how the author is going to end it.

Wish it was longer...

About time this couple got a decent doujin together.

You're right, offering my own opinion is shitposting because I didn't write a 5 paragraph medical essay on it, and when did I say transphobic? I'm saying that a penis and yuri doesn't mix. Might as well say im heterophobic instead.

"Should NOT be paired with the futanari tag unless there is somehow a separate relationship that does not involve futanari." literally stated on the tag itself.

But yeah I won't say any more on this matter. I may not understand what all this shit is about and I may never will, but I don't go around calling everyone that disagree with me (something)phobic

Doesn't change the fact that either transgender character or futanari character considering themselves female and having sex with other female is a lesbian sex hence it is yuri.

Yeah no I'm going to have to disagree, Doesn't matter if they think they're female or not. If they have male genitals then it's not yuri.

So you can say that every het doujin is yuri as long you argue that the guy identifies as a woman? what

If it's biologically a male it shouldn't be yuri.

If there's both penis and vagina then it's futanari

did I miss something?

Serious but worried boss falling in love with the ditzy worker, and her slowly finding herself in love too...

This is pretty cute... and gay

I think the anime and manga are both based off the game. The anime seem to be in the future of the game/manga though.

nightblade96
My Sister Found Out That I Draw Yuri Manga discussion 04 Apr 00:15
Quote

Wait, is Miyu a guy or girl? I can't tell

nightblade96
Song About a Piece of Junk discussion 01 Apr 16:49
Quote

I've been wondering where all the fan stuff for NoA were

I uh, don't really get this, can someone explain

And this definitely happened in the show offscreen. Yep.

So basically she fell in love with Jun but Jun is just having sex with her so she can prostitute her off but changed her mind at the last minute? 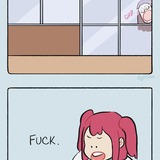