Are you sure she's not named Malenia? Because all that sounds like Malenia to me.

Malenia is an optional super-boss in Elden Ring, haha. The joke was how similar they sound in terms of crushing difficulty.

god like, someone offered up the possibility that Maya may be trans several chapters and years ago now, and holy shit, this chapter with it's "only a few people called me by that name" in addition to everything else that other people have noticed from previous chapters. No way there's a cis explanation for this one haha

Yeah, the amount of emphasis placed on Prez asking her out of the blue to play Viola, and then going on to elaborate that it would be a twin role ("You'd be great in both male and female costumes!") says a lot to me. It totally works fine as an androgynous gloomy cis girl suddenly being reached out to by the outgoing drama club president, but it becomes even sharper and more powerful as Maya's fond memory of being seen as who she is for the first time.

This got a good cackle out of me.

Gale
A Story about a Very Lonely Female CEO who Falls for a Lesbian Prostitute in Seconds discussion 22 May 05:13
Quote
363 posts
joined Aug 11, 2014

Hmm... I sympathise with the author's desire to retain some narrative tension and intrigue about the situation, and not show the characters literally telling us how the story is going to end, but arbitrarily deleting a speech bubble was a little clunky. Perhaps it would've been better to cut away from their meeting at some point before Noa's misunderstanding was cleared up, and only show the result of Amano finding out she's suddenly leaving the brothel? Then we could flash back to the meeting again when it's time to resolve the tension and find out what exactly Noa agreed to.

So I like this a lot actually, even if the ending feels the need to drive the message home a little too hard to consider what would be more satisfying. Literally nothing would have to change for them to live together, it'd be fine so them being direct neighbors is a little funny all things considered.

Thinking about it, I feel like the better effect could have been achieved by having them have that exact same "Well, goodnight!" moment going into different rooms in the same apartment, rather than neighbouring ones. I think I would have been happier with that.

Yeah, okay. They're not in a romantic relationship, but they're committed to being together. I can get on board with that. I feel like they should probably just live together, at this point, but having them be neighbours is pretty much perfect as a visual metaphor for the relationship they have, so I can't really complain.

On the whole, I feel like this could very well be the best asexual romance story that we could possibly have gotten, for better and for worse. It fully explores the depths of their feelings for each other without cheapening their identities, and shows them growing and becoming fuller people together. Even so, it still feels a little anticlimactic. I think we're straining at the limits of the genre, here - maybe the takeaway is, stories centering deep aromantic partnerships can be great, but don't structure them as romance.

Lmao, polyamory is a disgusting fantasy, but molesting a friend in their sleep is just a youthful indiscretion? Yeah, okay. 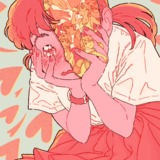 This is such an inventive way of showing a crush. The one that's caressing her finger is a really good touch, too. The fact that it's her left ring finger feels like a suitable coincidence.

Lmao, I tried to pay attention to what was happening in the story, but I couldn't stop staring at the butler lady and seeing exactly Linhardt from Three Houses.

I was so excited when I saw this update. I couldn't click on it fast enough, and boy did it not disappoint. I fucking cackled at that last page. Please, please tell me that her dreamy, irresistible senpai has a husband and kids in England. That would be perfect. Pack even more layers of misery into this train wreck, please.

Saonji: ships everyone else
Everyone else: ships Saonji with Tachibana

The irony is delightful.

People saying "The android is a loli in the end because Itou Hachi's gotta Itou Hachi" are correct, but I also want to point out: if the android had looked like a child in the first place, nobody would have blinked. It would have easily been explained by the grandmother saying she wanted her lonely granddaughter to have a friend. But if that had happened, Itou Hachi wouldn't have been able to draw a clingy ojou-sama kissing her clueless but enthusiastic teen robo-maid, and we all know what really matters to Itou Hachi.

So... This is speculation, but with all the foreshadowing about things feeling "out of sync", and her strangely intense trust in Menou, the odds on Akari having travelled back in time with her powers seems pretty high, huh?

This seems pretty interesting, anyway! The description made it sound a bit edgy, but it doesn't feel unnecessarily dark so far, and the worldbuilding is fairly intriguing. I'm on board. 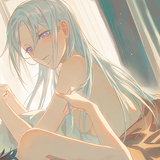 I really love the expression Edelgard has, here. It's like she's caught in this moment of reflection, thinking about how grateful she is to have to have Byleth in her life, how much she adores her, how lucky she feels in this moment. It almost looks like she has a tear welling up in her eye, too? It's really sweet.

Gale
Milady Looked Extremely Troubled When Her Engagement was Annulled, so I Stepped In to Help Her discussion 01 Dec 17:23
Quote
363 posts
joined Aug 11, 2014

And exactly how else this situation could have been solved favorably?

Edit: Misread your point. It makes sense that the king is the one who brings down the gavel, sure, but he didn't need to be the one who laid out the prince's idiocy or exposed the other girl as being an assassin. The maid would have been much better served as the one explaining all that stuff, having uncovered all the facts and made all the preparations for this exact moment, so the king has no choice but to punish his own son. That way, it shows how much work the maid has done behind the scenes to protect her mistress, and also gives her way more lines to express the emotional bond they ostensibly share, instead of relegating that to a few pages at the end.

Gale
Milady Looked Extremely Troubled When Her Engagement was Annulled, so I Stepped In to Help Her discussion 01 Dec 13:55
Quote
363 posts
joined Aug 11, 2014

I was all pumped up when the maid jumped in, but then she kinda just stood there? She showed guts insulting the prince to his face, but it was the king who did all the legwork on this one, and that wasn't super satisfying. Maybe the author felt that the hyper-competent maid gimmick is overplayed, but I wanted something a bit more substantial than her standing up and saying "What about this [commonly known and easily verifiable fact], huh?" when the king comes along a minute later to deliver the real kicker.

Even then, if the maid isn't here to be all-knowing and badass, give me a moment where the maid passionately extols her mistress' virtues in all the ways only a lover would recognise, or the noble lady fiercely coming to her maid's defence when the prince disregards her words as a mere servant. Something more personal between them, y'know? I can see yuri potential between them, but not much yuri energy. Wanted a bit more from it.

Okay, wait, are they seriously acting like her crippling character flaw here is how indecisive she's being, that she doesn't know whether she wants to choose her loving supportive girlfriend who she cheated on, or her long-reviled but sexy ex with whomst she cheated? Like, she's not being decisive enough, and that's why she's such a disappointment to everyone? Am I reading that right?

That friend, lmao. "Don't you ever grope your sister's boobs?" "Y'know, you two are the perfect height for kissing each other. Haha, I kid. But really, though..." I can't tell if she's observant and open-minded, or just weird. 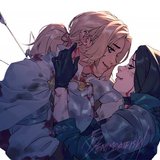 Did Catherine protect Shamir from those arrows? Or was Shamir the one who put them there in the first place? The world may never know.

"I think my girlfriend is cheating on me!"

"I'm just going to go ask her instead of jumping to conclusions."

"The pretty girl is at my girlfriend's house! It's true! She really is cheating on me!"

"I'm just going to tell you the slightly awkward truth instead of trying to cover it up and make things worse."

This chapter was a real rollercoaster with my expectations, wow. And then we had a really sweet last word from Kanda to cap things off. I'm happy with that. Good series, I enjoyed it a lot.

All morning, it's "Sayaka" this, and "Sayaka" that, but then Yuuki calls her "mom" again and that's when her heart skips. Somehow, that makes it feel even more scandalous, lmao.

Feels really weird, at the moment. Like, I don't get the choice to immediately jump ahead to the nth day of them acting as lovers, where Renako is already tired of it and refusing to play along, and Mai being mildly flirty has no impact because we don't have a baseline for her "normal" behaviour. If all the same events happened, except this had been a "friend" day and Mai had left on the promise that she'd be stepping things up from tomorrow on, then we'd have a bit of intrigue and anticipation going, but instead...

I dunno, maybe they're still building things up, but I'm not really invested in them as a couple yet. They're attracted to each other, yeah, but it doesn't feel like they're on the same wavelength at all. It's like they're reading from different scripts.

Lmao, I dunno. On the one hand, senpai is a horrible person. On the other hand, if she actually succeeds here, and manages to trick Maki into breaking up with Liz? For reasons that are entirely false, but to Maki, would at least feel noble and self-sacrificing? It would be the nicest thing anyone in this story has done for Maki so far.

Just think about it! This is an incredible chance, for her! If she walks away now and never learns the truth, then she will:
1: Finally get off of Liz's wild ride once and for all
2: Maintain some sense of dignity, at least in her own mind if not in reality
3: Be able to look back on this relationship through rose-tinted glasses as a great love affair that simply wasn't meant to be, instead of the revolving door of mundane indignities and gross betrayals it actually is.

I'm serious, this could genuinely be the best thing that's happened to Maki since she met Liz. Like, I'm kind of joking, in the sense that I find this incredibly funny and I'm laughing while I write, but I also genuinely think that it's true. Obviously it's not ideal - ideally, Maki would grow a spine and leave of her own accord after learning the truth, or Liz would grow a sense of self-awareness and realise how awful she's been. But I don't think either of those are actually likely to happen, whereas I feel like the author might actually be edgy and melodramatic enough to make them break up over this, so I'm kinda hoping for the best, here.