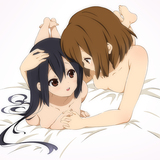 Even M.C. Escher can't help but ship AzuYui, that's the power of yuri in action!

Hard to believe this is from the same guy who did Inugame-san to Nekoyama-san.

So THAT'S why I recognized the art-style! No wonder it seemed so familiar! :P But yeah, this was an interesting and fun read. I'll definitely follow this one!

Oh goodness what I wouldn't give for Riko and Haru to NOT end up together! Seriously, can't we just have two main characters in a Yuri manga who don't end up together? 'Specially considering Riku have Akane around to fill the void in her heart... and stuff.

Besides, I feel some of the Riko-Haru Owarai-magic would disappear should the two get in an actual relationship. They make such a great boke-tsukkomi pair that I would be saddened should this disappear, romance or not.

I'll be honest, I'm 14 chapters in and I just don't know what to do with this Manga.

On the one hand it is rather funny, the pairing is adorable (though so far it hasn't really gone anywhere), and the characters are mostly likeable.

Yet at the same time things are just to strange and awkward for me to really grasp them. It's all just the main character making stupid decisions and having stupid delusions, despite the fact that as far as I gathered she's supposed to be someone who's rather socially capable. She's seemingly ostracising herself more and more from the "normal" people and falling deeper and deeper into the Otaku swamp, and through it all forgetting the rather simple idea that "Honesty is often the quickest way." I mean, if she had just admitted from the start that she weren't that into PrePure but were willing to give it a shot (which she has so far done with gusto) things would've just been so much easier for her, not to mention easier to relate to for us as readers.

All in all, if the situations didn't seem so fabricated I might've found them funnier. As it seems we're not laughing "with" the main character but "at" her. And honestly I don't know what I really feel about it. Then again, I might simply be overthinking things, but there's still this nagging feeling of "Why in the world are you doing this?" that I can't shake of no matter how I try.

Well. If she personally gave it away to charity, it would still be used by her, therefore defeating the whole purpose of "cleansing herself of her past". She'd always know where the money went and would be reminded of her past every time the charity appeared in public or whatever. Even if people picked it up after she threw it away, the transaction wasn't personal and was totally indirect. Talk about a "lucky day".

Maybe I'm looking too into it, but hey, just my two cents.

I will begin by saying I like the way you think, it seems like an appropriately straight line of thinking for most people.

Oh my fucking god I screamed at the computer when she threw all that goddamned money away! SHE COULD'VE USED THOSE MAN

And then continue by finding it hilarious people are still shouting "THINK OF THE MONEY!!!" despite drpepperfan's threat of turning them into puppet pals if they do. God speed you future mittens!

So I accidentally stumbled upon this, yet I don't think I've ever seen such an adorably ridiculous and ridiculously adorable manga ever before. I really enjoy this one!

Chapter 4 has been released as a web comic, and it now has 10 extra pages! It has 24 pages rather than the 14 pages we saw previously. I would imagine that when Morinaga-sensei found out that Hirari was ending, she hurriedly submitted what she had ready to make sure it was published, even though it was not complete.

I'm dropping a hint; there will be progress of a sorts, finally!

I have moved this to the front of my to do list, and am working on it at this very moment. I may be releasing these 10 pages as a ch. 4.5, or I may re-release ch 4 with all 24 pages; I've not decided yet. This one is still officially on hiatus, but at the first sign of a chapter 5 (I'm very hopeful now) it will become ongoing again.

Oy, hand us a link would ya kindly? If I haven't heard wrong the biggest reason so many yuri artists fall out is because lack of sales, right? So if we can start a trend where they are able to make some money online, either through add revenues or actual online sales, we might get more content and less series that fall before their time, no?

Besides, if it is online somewhere it would just be rude not to go give Morinaga some kind of encouragement just because we can't read her originals, wouldn't it?

Wow, is it weird I never noticed the lack of arms 'till the part about the prosthetics? :O But yeah, dramatic and wonderful!

Am I the only one that considers this ending NTR? I mean, she's still going to collect sobame?

Does NTR even count when you know it's going to be an open relationship from the start?

Not that this Queen is bound by common rules and convention, of course. She is always the exception.

It's still NTR, even if the other party is willing. So the tag should technically still apply, I think ^^
I guess it's just me, but it just doesn't sit right. I'm not a fan of infidelity at all.

If it's an open relationship it isn't cheating. That's just part of the relationship negotiated by those in it.

Plus, I think she's the only sobame to go so far as to marry the Iono. So there's that.

Besides, as mentioned in the first chapter (after the introductory one):

Soba-me (soba-meh)
1) Woman who closely supports a nobleperson.
2) A wife besides the official wife; Concubine

So speaking in a "stop this eurocentric mindset" kind of way, it isn't cheating since they're all Sobame. A bit uncouth and disrespectful to the current Sobame maybe (not to mention to Eto) but I wouldn't consider it cheating since supposedly they all knew what they went into to begin with.

This is one of the most adorable series I've ever read! I love it!

In a way I can see why she's doing this. I mean, if I'm not mistaken arranged marriages are still a thing in some parts of Japan. Hence if she were to run away with her girlfriend instead of going through with it she would most likely be forced to cut ties with her family altogether, seeing as how she'd draw shame over the family name if she didn't go through with the marriage. I dunno, I don't think I know enough about it to actually be able to make a statement about it, but all I'm saying is there could be many more sides to the story than at first thought. I mean say that both knew about it when they started the relationship, that wouldn't make it less sad when they were finally forced to break it off.

Yes, this story is very sad, but then again most award-winning stories aren't the cute ones with the good ending but the sad ones with the thought-provoking one. Personally I liked this one, since it tells a good story. Maybe not a happy story, but a good one nonetheless.

I have no idea what to do with this. It's going at the speed of light, and barely leaves time for the viewers to reflect upon anything. But I like it nonetheless.

As much as the ending disappointed me, I don't think the manga itself was that bad. Sure, for a manga based on threads of fate and relationships between people (romantic or just friendly) things really didn't go anywhere, but it was a cute journey. We got some feeling from it all, we managed to find a cute OTP to follow and be disappointed at not happening in the end. I mean, if it really was all that bad we wouldn't have been disappointed, would we? And if we go by the "accepted rumour" that it was cancelled and thus had to end it here like it or not we really could've had much worse than we did.

All in all, 7/10. We didn't get to see the desert, the main course was half-finished, but the starter was satisfying and interesting enough.

Never before have I seen a manga more deserving of the Body Swap tag. Loved it!

I didn't know I needed this in my life. Cute animal-girls and yuri subtext in one chapter, political commentary and world-building in the next. And a dude who loves world-building almost as much as yuri subtext (not to mention actual yuri), I think this has made its way into my Top 5 manga list, despite the strange Alien subplot thingy.

I have seen insanity, and never before have I been more happy to consider myself sane. This one is filled with enough fucks to last the internet for centuries to come. Despite the tags it lured me in with a cute and innocent art style, but then it filled my mind with so much wat.

Is this what the Ahegao tag is for? The complete numbness after a mindfuck of this scale? If not it should be.

I really have no idea what to do with this one. On the one hand it is bizarre enough to pique my interest, yet on the other it is an ecchi manga about girls who are at most 12 years old... Imma just gonna follow, to see where this wild ride ends.

I enjoyed this one more than I did most of the other in the set. I dunno why, maybe it is the role reversal. It is quite endearing, really! Cute!

Great Scott, this was so disappointing. I mean, I know I really couldn't expect much what with such a sudden twist at the end of the second-to-last chapter, but they really didn't answer anything.

The setting, as ridiculous as it was, was at least intriguing. The shipping was kinda cute (and with so many more characters really could go anywhere). A plot twist where we find out Youko has a fiancé, that really doesn't lead anywhere...

Sorry Unohana-sensei, not a fan.

I'm saddened by the lack of material in this tag.

I was kind of confused when she appeared normal, because I assumed their names reflected how many eyes they had. Hitomi: hito = 1, Mitsumi: mitsu = 3. (and I'm pretty sure everyone's name is related to their special traits somehow) But then her true nature was revealed and everything matched up again.

I just love this. And as someone without any real knowledge in Japanese I had no idea the joke was so in your face the whole time! This is the kind of humour that amuses me, 'specially when I finally get it.

Also, is it just me who thinks Shitara-Tongue-boy is under-appreciated as a pairing? I mean sure it is no Ooki-Osanaki, and Tabecchi-Futabayashi may be really cute in their own weird way, but nobody seems to talk about the first student pairing, not to mention the only pairing we've really seen proof of twice. What do I know, maybe I'm the weird one.