I can't even anymore with this series, everything is so fu*ked up. Yet I'm still here....haha.... 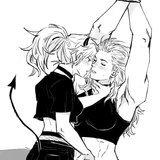 Why does this look like a Mercy X Zarya fanart? I think I've been playing a little too much Overwatch...

I personally adore age gaps so ofc I'll be rooting for Ema x Anna. It looks like it's going down that route anyways~~~

Yo I'm quite enjoying this influx of wholesome yuri from Subaru, it's a deviation from the usual M.O. but I love it.

After I ask what's that from, and then recieveing an answer and than watching that is probably gonna end up being one of those Curiosity killed the cat situations...

Sexual Frigidity: Failure of a female to respond to sexual stimulus; aversion on the part of a woman to sexual intercourse; failure of a female to achieve an orgasm (anorgasmia) during sexual intercourse. This disorder can stem from psychological or emotional problems such as stress, anxiety, depression, fatigue, worry, guilt, fear of painful intercourse and fear of pregnancy. It can also develop from the undesirability of a partner, the undesirability of the setting, and the use of alcohol or drugs.

And there it is folks! The abuse we've been waiting for has finally shown it's ugly head! No more arguing, time for some action~ I got my right hook ready to go! ((⊂(`ω´∩)

Riptide01
A Girl Whose Breasts are a Little Big and is Kinda Pretty discussion 25 Feb 00:21
Quote

Oh, how I wish real life worked this way~ I WANT TO BE TOPPED LIKE THAT!!! ＼(T▽T)／

Haha, amateur psychologist over here, please ignore if you don't want to read this. Just some interesting psychology happening that I thought would be fun to share. I've seen many comments on how Midori deserved being in an unhappy relationship with the idea that everything was her fault. Although there may be some blame involved on Midori's part take into account two important psychological things: (1) The Just-World-Phenonmn (2) Fundamental Attribution Error. (1) The Just-World-Phenonmn refers to the simple idea that good things happen to good people while bad things happen to bad people. Simply put: karma. Happens a lot in rape cases (excuse the extreme example) when people tend to blame the victim such as saying things like: "It was her fault she dressed that way and she chose to get drunk." (2) Fundamental Attribution Error is the tendency that people think that others act the way they do because it's in their personality, and doesn't account for the situation. An example: Becky, a school teacher, has a student named Mike who often gets into fights with other students. Becky thinks this is due to Mike's aggressive personality when actually Mike's mother is dying in a hospital and Mike releases his negative feelings through fighting. (Again, maybe an extreme example). Whew, I felt like I went on a lecture, and Idk if anyone got all that but I hope you enjoyed it.

Surprisingly tame for something by Homura, but I enjoy it nonetheless. 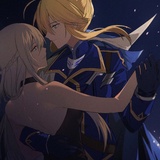 I ship it so hard

Riptide01
The Little Bird and the Brassiere discussion 04 Feb 23:41
Quote

Lol, I can just feel my FBI agent judging me right now. Fingers crossed that the Swat team won't come this time.

So a "throw them in the water and hope you can swim situation", eh? Either you drown or you swim. Hoping the latter for Neeko's case, because I believe it really would help her self esteem. I believe her trauma is mainly based on her interview failures caused by her anxiety, I don't think working would be a problem. She seems to be capable in doing many things, such as making those leaflets or making friends. We see that she used to be an outgoing and cheerful girl, so I think her problem doesn't lie with social interactions but her personal self-doubt. Her repeated failures in entering the "adult world" has caused her to develop an aversion to the idea of working, so by showing her that she is capable of thriving in the "adult world" through working, she may be able to overcome her trauma. However if she fails again, it'll only worsen and lead to worst problems such as distrust and a possible dislike to society in general. Well that's my take on it. 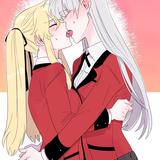