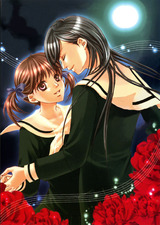 Based on the novel series by Konno Oyuki. The setting is Lillian Academy, a private Catholic all-girls school where the student council is known as the Yamayurikai (Mountain Lily Council) and younger students are taken under the wing of older students through a system known as the "soeur system" ("soeur" is French for "sister"). The main character, Yumi, who is basically a nobody, suddenly finds herself interacting with the members of the Yamayurikai and their soeurs, most notably her crush, the talented, beautiful, and withdrawn Sachiko...
These are manga shorts drawn by the illustrator of the novels, Hibiki Reine. They were all printed in the magazine Cobalt, which the novel is serialized in; Before the Festival was also printed in the Marimite Premium Book (ISBN: 4086004550), and the others were printed in the Marimite Illustration Collection (ISBN: 4086007975). All are rather short.
As far as we know, no more of these shorts have been done. If any new ones appear in the future, we'll scanlate them.
"Before the Festival" is a somewhat humorous and bittersweet look at the process of trying on costumes for the play.
In "Christmas Present," Yumi and Sachiko exchange Christmas presents. Very sweet.
"The Beginning of the Year" is about Yumi and Sei's shrine visit on the day after New Year's Day. It has another (brief but) hilarious look at Sei's crazy driving.
"Yumi's Valentine's Day" is about Yumi's attempt to make chocolate for Sachiko for Valentine's Day. Read this to find out what was in the "bad" chocolates...
In "Until Graduation," Shimako thinks about how much she is going to miss Sei when she leaves.
"All Alone on Sunday" is a brief look at Yoshino's feelings about Rei's date (the one that was a prize in the treasure hunt).