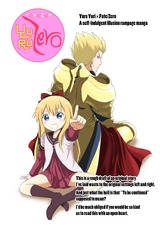 YuruZero is a Yuru Yuri x Fate/Zero crossover doujin by Pixiv artist しまざき(Shimazaki). After one of Nishigaki-sensei’s explosion experiments, the 7 servants appear in the Yuru Yuri world instead of being summoned to Fuyuki City to participate in the 4th Holy Grail war. The art style improves in later chapters so don’t let that deter you from a great read. Even if you aren’t familiar with the Nasu-verse, the artist’s portrayal of the Yuru Yuri characters is spot on. - Bakkin Translations