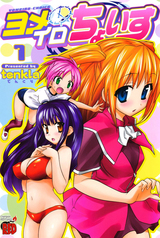 Saku had a normal life, living with his cousin Kuran and being tormented daily by his childhood friend, Karin. That is, until the day a girl named Kiiro showed up out of nowhere claiming to be Karin's and Saku's daughter from the future. Convinced she will disappear from existence unless Saku and Karin get married, she makes life a lot more complicated for everyone. Things only get crazier when Hiiro, a girl claiming to be Kuran's and Saku's daughter from a different timeline in the future, appears with the goal of getting Saku together with his cousin Kuran. Saku is suddenly faced with a dilemma: whom does he choose as his wife, and which daughter does he save from disappearing into nothing?