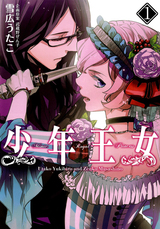 Shounen Oujo (Boy Princess) is a shoujo manga by Utako Yukihiro, with the original concept by Zenko Musashino. It follows Albert, a poor boy living the Queendom of Morrigan, a country where men have no rights and are ruled over by women. Albert and his friend Theodore are abducted by slave traders, but they are soon bought by a rich girl from a noble family. It turns out that the girl is 11-year-old Princess Alexia Lumiere, heir to the throne of Morrigan, who wants Albert, who bears a striking resemblance to her, to act in her place while she is away for six months. Thus begins Albert's life as Princess Alexia.