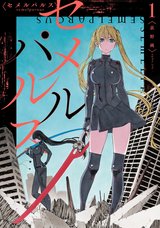 To stop the otherworldly "Kaijuu" from invading Earth, individuals wielding special powers known as "Aegis" are tasked with the protection of the world. Aratsugu Yorino is one of the aspiring "Bastioners" - soldiers who fight the invaders within the wall between the two worlds.

Yorino and her best friend Haruka were always at the top of their class, and vowed to become professional Bastioners together. However, when a Kaijuu broke through the wall during one of their exercises, Haruka lost her life saving Yorino. Cornered by the Kaijuu once again, Yorino was rescued by a Bastioner called Kaminoi Youko. After asking Yorino to give her Aegis energy, Youko defeated the Kaijuu with overwhelming power.

With her heart full of determination, Yorino placed first on the Bastioner exam, all for the sake of saving herself from ever feeling loss again.