Secret of the Princess by Morinaga Milk — Completed 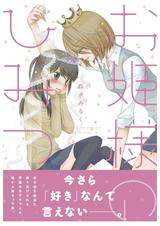 From the back cover blurb:

The principle’s valuable vase has been broken by school prince and volleyball club ace, Fujiwara-senpai.
“Don’t tell anyone! I’ll do anything you say!”
Having witnessed the incident, Miu, on the spur of the moment, chose to go out with her senpai. Over the course of dating, Miu became attracted to her senpai’s surprising frankness, but by then it was too late to say her true feelings.
This is how she came to fall in love with her senpai.
A bittersweet high school romance.