One Hundred Views of Awajima by Shimura Takako — On Hold 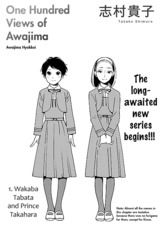 A series of oneshots focusing on the lives of girl's attending an opera music school. Ryouko Ueda from Shimura's series Sweet Blue Flowers makes an appearance in chapter 2.

The status of this web series could be considered ambiguous - Shimura has recently mentioned it on her blog, and it still maintains a front page presence on the Poco Poco website. However, its last update was over 2 years ago.