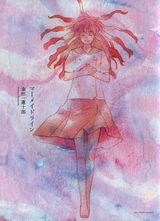 "Megumi and Aoi," a three-part story, is about a girl who says she's a mermaid princess.
In "Girl*Girl," an extra story in the "Megumi and Aoi" Mermaid Line series, Aoi contemplates what things would be like if she or Megumi were guys.
In "Yukari and Mayuko," Yukari starts a pretend relationship with her friend Mayuko after Mayuko's heart gets broken.
In "Ayumi and Aika," a two-part story, Ayumi's boyfriend makes an announcement, but not the one she was hoping for.