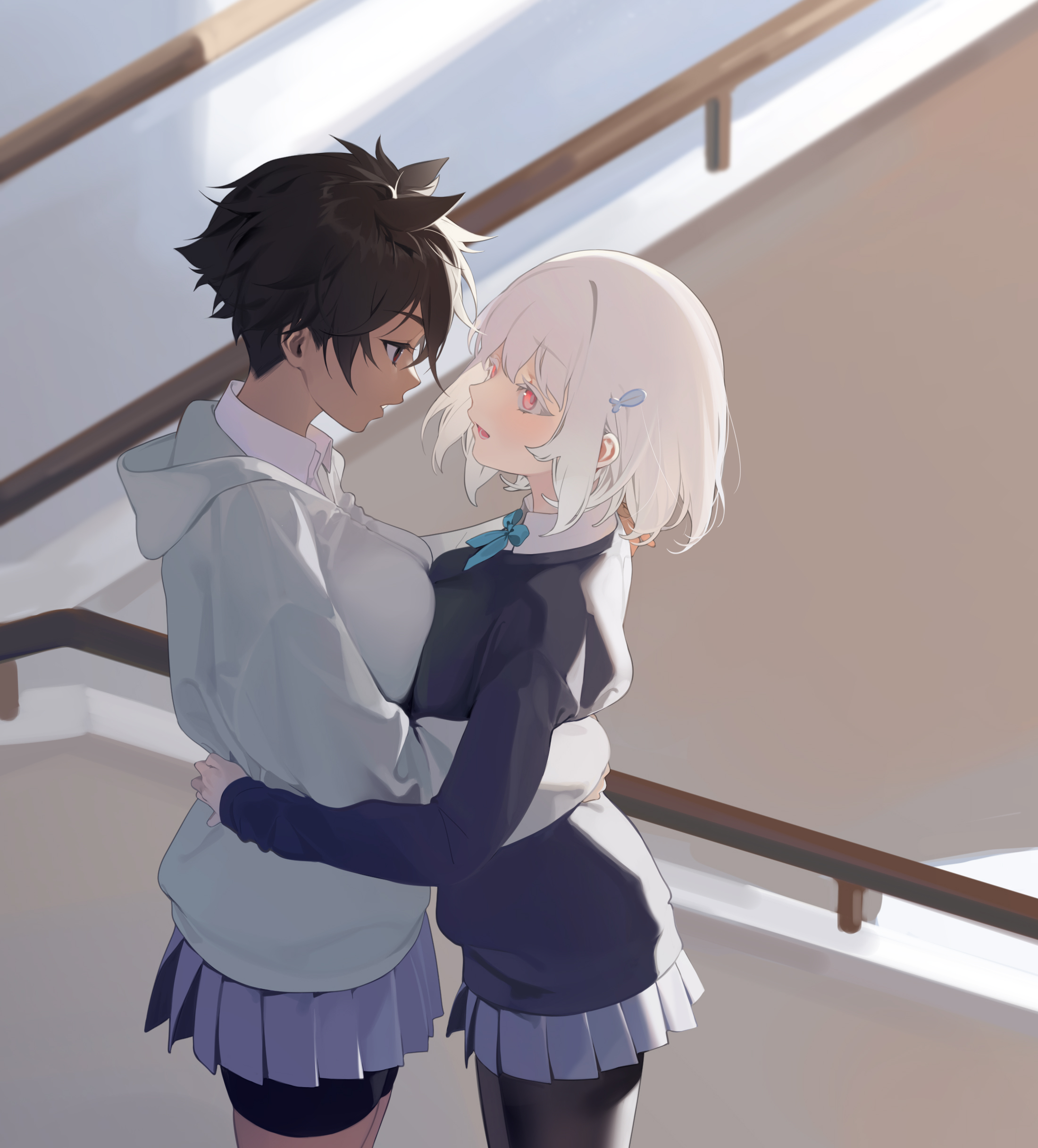 Are those ears or really cute tufts of hair?

^ It's tufts of hair that happens to look like like ears. (how much vary a bit depending on the picture).
by the way the dark-skinned tomboy is Mitsuki and her white-haired girlfriend is Natalia.

Why is this on here? Ohisashiburi specifically draws them to mock yuri, no self-respecting yuri fan should be supporting such scum in any capacity

^^ Mocking yuri? How come? Can you give me some context? I've seen the author's pivix and the only thing I saw was the tomboy getting dicked.

^^^ That's disgusting. Thanks for information.
Now if his goal is specifically to mock yuri, he isn't doing it very well most of the time.

^ quite the opposite, he baits in those who appreciate yuri with art like this post only for him to ruin what we like. It’s more malicious than the typical fetishist drawing “conversion” crap.

Ummmm before we go completely destroying this guy, @YotoHime, are you sure that example comes from Ohisashiburi himself? I'm exploring his pixiv and the links from that and I don't see anything like this. Can you provide a link to some location associated with him specifically that contains this (undeniably offensive) art?

Eromancer, you can find those images easily on the boorus under his name. He prob hosts them somewhere else or on something private. For example, Exhentai has all of it(Nasty stuff)

@eromancer This stuff should be on his fanbox/fantia/whatever. I grabbed the translated one off of ex, and it was a whole album of this crap.
@Lilliwyt The difference is that Shou doesn’t draw any het of the Vampeerz girls. The problem here isn’t artists drawing other genres, the problem is this guy specifically drawing lesbian characters with men (doubly so when they’re his OC’s that he made for this one purpose) and then his content getting posted on here as if nothing happened. No, I’m not saying people shouldn’t be allowed to draw x or y, but Dynasty isn’t a free-for-all place and it most certainly shouldn’t include stuff from an anti-yuri artist when the main attraction of Dynasty is the yuri and its main denizens are fans of yuri. It only furthers Ohisashiburi’s malicious goals by having this type of thinly-veiled crap spread around yuri communities.

i think saying he's mocking yuri or whatever is kind of a stretch, dude just have a (disgusting, problematic) fetish. at least he has the decency of making his own characters and not using ones from actual yuri shows

@YotoHime - Well I just finished skimming through all of his stuff on Danbooru. There's definitely some of this gross stuff there, and I completely understand how you feel. It's offputting to see characters that you might feel a connection to subjected to casual creep molestation. Nonetheless, there wasn't that much of it. Clearly this guy doesn't mind using his characters to occasionally indulge in fetishes which you and I find repugnant yet some people (strangely) enjoy. But I don't know that it's necessarily correct to conclude that he mocks yuri - the guy seems to put a lot of care into his art for someone just trying to troll yuri fans. I'd certainly be willing to change my mind on that if some of the yuri panel art translations contained similarly affronting language. Right now it seems to me this guy's tastes are ... well, let's just say "complex". I don't find that it keeps me from enjoying the purely yuri art, though. Your valid point about Vampeerz notwithstanding, I'm respectfully inclined to side with @Lilliwyt on this.

@Pingoloco - I'd be careful about calling someone "lesbophobic" and "malicious" based on adult art. Firstly, there's always a distinction between the artist and the objects of the art - "characters" (admittedly a generous term here) don't necessarily reflect the views of their creators. (Assumptions like that are currently having a ruinous effect on YA fiction, for example.) Also, one always has to be careful when it comes to sexual fantasy - there's a distinction between ideas that turn people on and what they find acceptable in real life. For example, someone who enjoys "rough" play or "nonconsent" fantasies (which, surprisingly, often appeal to women) isn't generally someone who endorses actual rape. When one sees upsetting art, particularly in a sexual context, it's easy to feel like it's intentional, but even the most obnoxious people will only labor so hard just to piss people off. More likely he's just catering to a controversial niche.

^ danbooru doesn’t have all of it, nor does gel. Sankaku might have it hidden behind premium. Ex has the most of it, which is unfortunate because you can’t just link it as proof when most people don’t have access to it.
As I said, I couldn’t care less about him drawing this crap, it just shouldn’t be on here.

^ I mean, "this crap" isn't on here, just one very cute image that clearly qualifies as yuri. Whatever else they draw, there's nothing wrong with this particular image as such.

@eromancer Danbooru has mostly 1% of what he made, because since it's paid/private content it can't be posted on Danbooru, so you probably didn't even scratch the surface of this content he creates.
Yes I would call lesbophobic someone who preaches an explicit discourse saying that "lesbians can't exist without dick" and "rape correction"
Being fiction or not, it's still a way for him to manifest what he preaches while using the fiction excuse as a shield to continue being lesbophobic

Just so everyone is aware, showing this again for everyone to see his lesbophobic shit.

We at r/WholesomeYuri subreddit already made a stand to ban any of his works.

ALSO: On top of what other people here have brought up, the artist has a pixiv post that features the same two girls alone and tagged it as "heterosexual" despite the art not showing any men nor there's anything remotely lewd in it. It feels rather insulting, isn't it?

^ Thing is, people that is not the artist can put tag on pixiv picture so that doesn't mean anything.And coul you please not link that picture anyway. We understand your stand already, there is no need to put that shit here.

^^ glad to see yuri communities putting a stop to this (and other, similar) guy(s)

@Lilliwyt anyone can add tags to pixiv posts but only the original artist can remove tags added by themselves. I can't remove the tags "hetero" or "bitch", so that only leaves one answer.

Besides, the site removed (or at least stopped posting) Amanchu content after the author killed the fan favorite ship.

Appreciate the discussion. However I do believe the artist's preferences have been thoroughly covered at this point, so I'll ask that the topic is dropped now. Future comments of the same nature may be removed. There are currently no plans to remove the image. Site & moderation feedback are always welcome in the Help thread. Thanks.

maybe they're bi, and at the end of the day, it's just a drawing